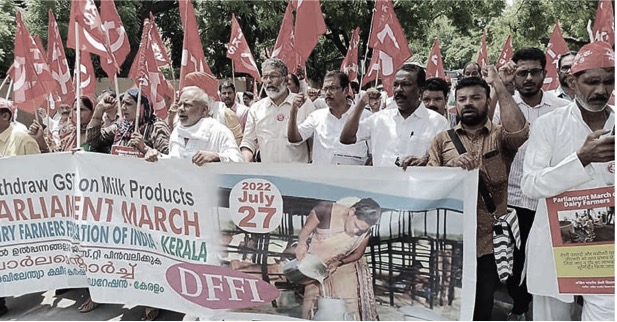 Dairy farmers from States such as Haryana, Rajasthan, Uttar Pradesh and Kerala held protests here on Wednesday, urging the Centre to revoke the decision to impose a 5% GST on dairy products and 18% on dairy machinery.

The farmers, under the banner of the Dairy Farmers Federation of India (DFFI), sent a memorandum to the Union Minister of Fisheries, Animal Husbandry and Dairy Parshottam Rupala, asking him to help the households engaged in dairy production in the country.

The GST, the absence of a fair and remunerative price (FRP) and rising costs of green fodder, is going to adversely impact small dairy farmers, who constitute 75% of nine crore households engaged in dairy production in India, the DFFI said in a statement. Dairy farmers held similar demonstrations at local milk booths, cooperatives, and district collectorates in the States, rejecting the new GST, the DFFI claimed.

The DFFI said in their memorandum that the sector is characterised by the concentration of small producers, with 75% of the rural households owning two to four cows.

The farmers said increasing inflation and fodder prices have pushed them to shift to other occupations. The recommendations of the GST Council will affect both the farmers and consumers, they pointed out.

“These recommendations will hit the cooperatives and small dairy farmers, and pave way for the monopoly control of the diary sector in India by the large corporate houses,” they added.