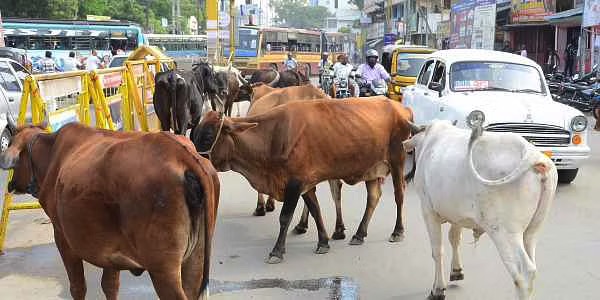 Stray cattle may not have decisively impacted the outcome of the recent Uttar Pradesh assembly elections. But it’s a problem that will not go away, as Prime Minister Modi  has himself acknowledged. UP has an estimated 19 million-plus cattle (i.e. the cow and its progeny) population. Farmers rarely keep cows beyond 5-6 calvings, by which time they are 7-8 years old and their milk yields cannot cover feeding costs. As regards male cattle, they have no utility in today’s world — where tractors, harvester combines/threshers, electric tubewells/diesel engines and artificial insemination have replaced bullock-drawn ploughs, treadmills, Persian wheels and breeding bulls. Nor does rearing cattle exclusively for manure or cooking fuel make economic sense when it is cheaper and less messy to use chemical fertilisers and LPG cylinders: Will the Ujjwala scheme’s beneficiaries want to go back to dung cakes?

Even taking an average productive life of 7-8 years for both female and male cattle, it means about 15 per cent of animals being rendered redundant annually. For UP’s 19 million cattle, it translates into some 2.9 million surplus animals — which farmers are letting loose every year and, perhaps, replacing with an equivalent number of fresh productive stock. Such regular herd turnover is what makes dairy farming viable; no rational farmer will maintain animals for their full lifespan of 14-15 years. The 2.9 million surplus cattle not dying, whether naturally or otherwise, are the chutta janwar (stray cattle) devouring the standing crop of the same farmers who have discarded them. Worse, their numbers are multiplying with every passing year. This is unsustainable, be it from an agricultural or even political standpoint.

What’s the solution? Allocating more funds for cattle shelters or procuring dung from farmers — as the Chhattisgarh government is doing and Modi is proposing for UP — cannot be answers. Scarce public money is better spent on building schools and hospitals than gaushalas. The UP government should, as a starting point, allow slaughter of male cattle. These are the ones causing real havoc, both in fields and in streets. It is not feasible to house them in gaushalas; they are violent and require more fodder and feed than cows. At a second stage, slaughter of crossbred cows can be permitted. Given that these animals have 50 per cent or more genes from Holstein Friesian, Jersey and other foreign breeds, they may not be deserving of the “holy” status reserved for indigenous desi cows! The advantage of this approach is that it ensures viability of dairy farming — crossbreds lactate earlier and yield more milk than desi cows and buffaloes. And no ruling party is better placed to take the bull by its horns than the BJP.