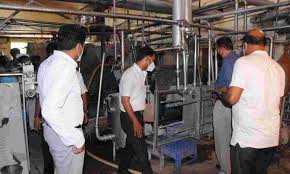 The prestigious Godavari Dairy known as Vijaya Dairy is going under the control of Gujarat-based Amul Milk Company in a few days. The company officials had visited the dairy in September and gave their nod to take over the dairy. Under the aegis of Andhra Pradesh Dairy Development Corporation, Vijaya dairy had flourished between 1978 and 1990 with 400 regular staff and 200 temporary workers.

Thousands of in twin Godavari districts supplied milk to the dairy and used to get their livelihood.Milk and milk-based products were sold on Vijaya brand name. Since 1991, the milk unit had been facing many problems due to lack of proper management. To matters worse, the dairy’s executive body’s term expired in the year 2017 and so far no new executive body was constituted afterwards.

Because of this, the milk collection was also drastically reduced and the farmers did not show interest to supply milk. Meanwhile, the government introduced Milk Mission scheme in the year 2013 to revive the dairy and also to provide livelihood to poor unemployed women but in vain.

Pasukranthi Scheme introduced in 2004 also failed and many private dairies came into existence and because of this Godavari Dairy lost its sheen. In the wake of Amul’s entry, the district administration is trying to establish 1000 milk collection centres in the district to supply milk to Amul.