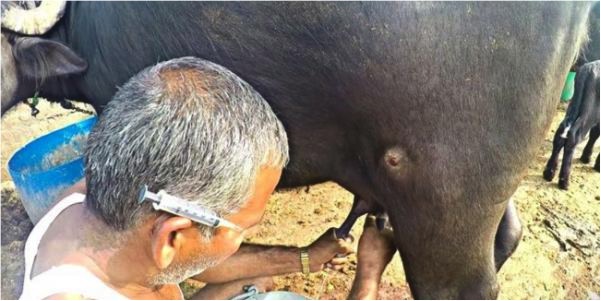 Following the Tuesday arrest of six dairy farmers in Pune and the adjoining areas for injecting buffaloes with oxytocin to increase their milk-producing capacity, milk federations such as Katraj and Sonai have decided to conduct the necessary tests to rule out any traces of oxytocin in the milk produced by them

Following the Tuesday arrest of six dairy farmers in Pune and the adjoining areas for injecting buffaloes with oxytocin to increase their milk-producing capacity, milk federations such as Katraj and Sonai have decided to conduct the necessary tests to rule out any traces of oxytocin in the milk produced by them.

According to Dr Madhuri Dhamale, head of the department (procurement) at Katraj dairy, the milk supplied to their dairy units is already checked for traces of antibiotics through the ‘antibiotic residual test’ and all such milk showing antibiotic residues above the prescribed limit is rejected as per the standard procedure.

Dhamale said that following the police action against the dairy farmers, the Katraj dairy has issued an advisory to milk producers about what to do and what not to do. “We have communicated to our farmers the same. We will not compromise on our product quality at any cost. We are aware about the police action against the dairy farmers. We have also decided to conduct the ‘Elisa test’ by selecting random milk samples which will help us identify the oxytocin residue in the milk,” Dhamale said.

Whereas Dashrath Mane, chairman of the Sonai dairy from Indapur, said that their dairy uses advanced technology and that they totally control the feed and medicine provided to their cattle. Mane claimed that in such a scenario, it is very difficult for milk producers to use illegal medicines such as oxytocin to increase milk production. “It is true that some farmers are using illegal ways to increase milk production, but our dairy unit is using advanced technology and farmers have to pass many tests for their milk in Sonai. Hence if anything is found wrong, we reject the milk on an immediate basis,” Mane said. On the backdrop of the police action against the dairy farmers, Mane said he will introduce necessary tests to ensure that their milk is oxytocin-free.

On Tuesday, six dairy farmers in Pune and the neighbouring areas were arrested for allegedly using banned Oxytocin injections to increase the milk-producing capacity of their buffaloes. Oxytocin, a schedule H drug, has been banned from retail sales by the union government since 2018 due to its misuse in the dairy industry to increase the milk-producing capacity of cattle. The central health ministry in 2018 banned the use of oxytocin after experts flagged its side-effects on animals and human beings consuming the milk of these animals. Despite restrictions however, many milk producers have been found using the hormone for increasing their milk yield.

In the latest case on Tuesday, five days after main accused Babubhai alias Aladin Laskar of Kalyan was arrested, the crime branch unit 1 team arrested six dairy farmers for using oxytocin injections to increase the milk production of their buffaloes.

Dinesh Khivasara, assistant commissioner, FDA Pune, said that dairy owners inject cattle with oxytocin to get excess milk instantly. Instead of providing cattle with quality feed, the animals are injected with oxytocin for quick release of milk from their udder, which is an illegal practice. Furthermore, the hormone is harmful to human beings as well. According to the Animal Welfare Board, a substantial part of the oxytocin injected into cattle could be seeping into their milk, with children being most susceptible to its effects. oxytocin is known to impair both hearing and eyesight, and results in exhaustion and loss of energy.