Productivity and Quality of milk is top priority of the Govt : Atul Chaturvedi 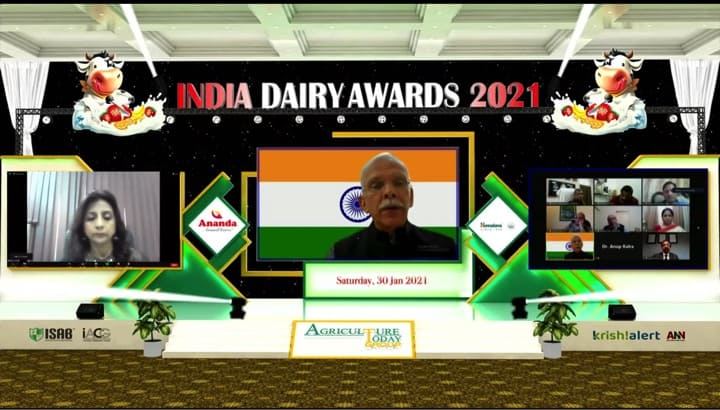 Agriculture Today organised India Dairy awards on Jan 30,2021. Key stakeholders from the industry, government and farmer groups attended the function. The policy makers shared the government future plans for the dairy and livestock industry. Ananda Paneer launched their innovative variants during the award ceremony. The winners of these awards in different categories are as follows .

Sh Atul Chaturvedi, Secretary ,Department of Animal Husbandry and Dairying started by sharing the latest milk production figures of India. The country produced 198.4 Mill MT of milk at little less than 6% growth rate in 2019-20 with a per capita consumption of 412 gms. He said that now we need a shift of mindset from managing shortages to handling surpluses.

He shared three key challenges in front of India dairy sector. The first one being that commercial aspect is overriding the quality and safety aspect of milk in the unorganised sector. Second is that due to poor productivity our cost of milk production is not globally competitive. How to enhance the milk productivity by making animals disease free, proper feeding and creating better pool of genome was the third challenge.

He shared the programs being launched by the Government in past few years like vaccination program, traceability through Aadhar card and nationwide Artificial insemination program. He lauded the developments being made in the area of IVF technology and sexed sorted semen. A soft mention of DIDF and AHIDF to create quality infrastructure for milk processing and chilling was done as his opening remarks.

Mr Tarun Shridhar Ex secretary Department of animal husbandry shared his vision for dairy development in India. Can we make dairy as an aspiring business for the youth? The policy maker must do everything to make it happen. We must not fall prey to fancy of being the largest or with the absolute numbers of production. India may be the largest producer of milk due to largest bovine population also.

The policy makers could work with humble targets like increasing average lactation production from 1800 litres to meet global average of 2400 liters first. He also raised the issue of inadequacy of vet infrastructure in terms of numbers and quality. For a population of 130 mill livestock there are 60000 vet institutions for health including mobile dispensaries with elementary facilities.

He also touched a very critical point of availability of good quality water for livestock. 85% of milk is water and in the absence of enough good quality water the growth of sector looks doubtful. Step sisterly treatment of buffaloes and negative publicity about milk by plant based beverages in India were his key concerns as a closing remark.

Expectation of dairy sector in Budget 2021

Dr R S Sodhi, MD GCMMF began his remarks on a lighter note. he thanked the government to atleast inviting views of dairy industry also for the budget. Dairy is a 8 lakh crore industry and still neglected the most at the time of allocation of budget. Out of 30 lakh 42000 Crores of budget dairy gets a minuscule allocation of 3289 Crores. Agriculture and fertiliser on the other hand receives Rs 214000 Crores.

He insisted to get dairy made the part of Agriculture definition. The livestock farmers must also get all benefits which the agri farmers receives. Dairy farmers are contributing 27% to Agriculture without any seed/crop loan, fertiliser/power subsidy and income tax benefits. Dairy is a better employer for youth in rural area than the urban opportunities. The quality of jobs being offered to rural youth in urban areas are very low standard.

He shared that in 70s and 80s an investment of Rs 1000 Crore only per annum in operation flood brought the sector a global leader. On similar lines the government must ensure at least Rs 5000 Crores in White revolution-II program . The total allocation for the sector may be increased to Rs 10000 Crore at least or 10% of total agriculture budget.

He suggested government to create Brand buffalo at a global level. Buffalo milk is far superior in nutritional contents as well as taste than the other bovine milk. It is also 100% A2 so that could also be a strong positioning point. He also requested the government to take stern actions against the industrial bodies advocating Plant based beverages to be better than the milk. He said that the bovine milk is a matter of over 100 million farmers and is the backbone of bovine sustainability in India.

Sh Atul Chaturvedi at the end shared the way forward for dairy sector policies as planned by the government. The government would like to see Livestock and dairy as an independent sector . The Gross value addition (GVA) by Crop agriculture from 2014 to 2019 dropped from 11.2% to 9.4%. GVA for livestock sector increased from 4.5% to 5.1% during the same period and set off the loss made through agriculture.

Milk is a source of liquidity and stability for a farmer. This is further validated as a farmer keeping livestock with crop farming never resorted to suicide . Milk is also a 365 times rotation of money for a retailer. It has a potential to create 12 million jobs in next few years. Quality and safety of milk and milk products will be the priority of the government. The government is trying to build a single window platform to issue a gold standard for product and process. There will be a separate logo for this gold standard.

The government is planning to support investment in infrastructure for chilling, testing and processing. An additional processing capacity of 115-125 Mill MT milk would require 1100-1220 , 3 lakh LPD processing plant. The collection would also require 170000 to 200000 Bulk milk cooler of 2000 Litres each in next few years. The government is planning to create quality infrastructure for Value added milk products .