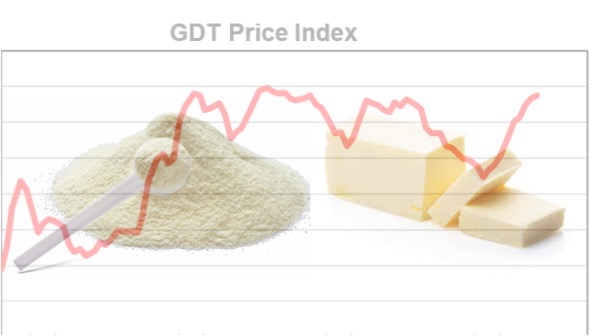 On Tuesday, skim milk powder (SMP) prices at Global Dairy Trade (GDT), the fortnightly auction platform of New Zealand’s Fonterra Cooperative, averaged $3,243 per tonne, the highest since the $3,264 of August 5, 2014.

Vegetable prices have cooled with the usual winter-time increase in supplies of carrots, cauliflower, cabbage, radish, capsicum and peas. Even onions and tomatoes aren’t on fire like they were only a couple of months ago.

That isn’t happening though in milk, whose production also tends to rise during winters when calvings by buffaloes peak. Dairies are now paying more for milk during the current “flush” season (October-March), even as prices of dairy products have firmed up. And if international market trends are any indication, they look set to climb further.

On Tuesday, skim milk powder (SMP) prices at Global Dairy Trade (GDT), the fortnightly auction platform of New Zealand’s Fonterra Cooperative, averaged $3,243 per tonne, the highest since the $3,264 of August 5, 2014.

“Global prices at more than six-year high is good for Indian farmers. It also opens up export possibilities, especially of white butter and ghee,” said R S Sodhi, managing director of Gujarat Cooperative Milk Marketing Federation (GCMMF). Anhydrous milk fat (ghee) prices soared 17.2% to $5,398 per tonne in the latest GDT auction, while butter was traded at an average of $4,735. That latter works out to around Rs 346 per kg, which is, in fact, above the Rs 305-310 being realised by Indian dairies on domestic sales.

Hardening of milk prices is unusual at this time

Hardening of milk prices is nevertheless unusual at this time. The calving season for animals, when more milk starts flowing from their udders, generally begins from September. That is when temperature and humidity levels drop, alongside improved fodder-cum-straw availability from the monsoon rains and harvesting of the kharif crop. The calvings peak in the winter and continue till March-April before the onset of summer.T

The unseasonal supply crunch being seen at present is basically a lagged effect of the Covid-19 ,induced lockdown that forced the closure of hotels, restaurants, hostels and canteens, apart from cancellation of marriages and other public functions. The demand destruction and price crash from it resulted in farmers underfeeding their animals.

“The impact of that is playing out just when demand is returning. Hotels and restaurants have already reopened, weddings are taking place, and schools, colleges and hostels are also restarting. So, we have a supply-demand mismatch,” Rahul Kumar, CEO of the French multinational Lactalis India, which owns Prabhat Dairy in Mumbai and Thirumala Milk Products Pvt. Ltd in Chennai, told The Indian Express.

The above mismatch could increase in the coming days due to three reasons. The first is that very few dairies – GCMMF, Karnataka Milk Federation and Tamil Nadu’s Aavin – are today holding enough stocks of powder and fat. The second is international prices, which make exports more viable than imports.

The third reason has, again, to do with Covid. The lockdown made it difficult for farmers to access artificial insemination services. There were supply chain issues – be it of liquid nitrogen containers, frozen semen straws or technicians. Not being able to inseminate on time could, in turn, translate into further delayed calvings.