Milk has a unique identity: All others are clones and derivatives 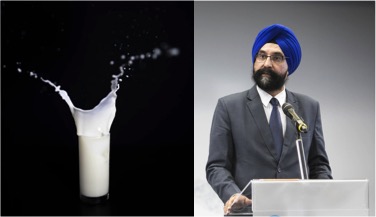 The buzz around veganism and resurgent drive for pushing plant-based drinks have exposed the Indian dairy industry to a new potential risk. The risk is that of confusing consumers between milk as is conventionally known, and milk that is derived from plants and non-mammal sources. That could lead to misinformation and misunderstanding. While there is no danger to the demand for conventional milk, explains a person in the dairy industry, it does not take long for misinformation to sell.

Also read : Plant-based beverages are no match for bovine milk

A brand like Amul, which has a consolidated turnover exceeding Rs 52,000 crore (during 2019-20), has taken cognisance of this. This brand decided to issue advertisements to create awareness among the general public about this misinformation. “Some people in the name of promoting veganism are spreading misinformation about the Indian dairy industry. I believe these are strong lobbies who are trying to sell a set of products by selling a bunch of lies,” explained RS Sodhi, MD, Gujarat Cooperative Milk Marketing Federation (GCMMF).

There are constant allegations that the dairy industry indulges in harmful activities. To which Sodhi replied, “In India, we respect bovine animals and no one indulges in such acts. If there are [miscreants], this is a small group. In every industry or sector, there are people indulging in wrongdoings. A whole group cannot be blamed for that.”

There has been a steady growth in demand for soya and almond-based drinks which are also called soya milk and almond milk. “In India, we do not see this as a major challenge to the dairy industry since milk is an important and regular component of regional diets for ages.” An official at National Dairy Development Board (NDDB) said, “As long as the consumer understands the difference between milk and plant-based beverages, the Indian dairy sector is unlikely to witness any major threat.”

However, it is safe to say, misinformation can hurt the industry that provides livelihood to 10 crore landless and marginal farmers.

“Having milk associated with plant-based beverages/ drinks may confuse a set of people. Other than traditional products like coconut milk, no plant-based drinks should be allowed to use the term milk,” stressed Sodhi. As per Codex Alimentarius – the international food code developed jointly by the Food and Agriculture Organization (FAO) and the World Health Organization (WHO), milk is the normal mammary secretion of lactating animals, obtained by milking without any addition or extraction from it. Many countries follow this code. However, this gets tweaked in some countries. While some western countries are very strict on the use of the term milk, there are some that allow the companies to use the word without understanding the impact, stated a source.

In the case of India, there are rules which do not legally permit the use of the term milk with any product other than bovine-produced milk. As per the Food Safety Standards (Food Product Standards and Food Additives) Thirteenth Amendment Regulations 2017, for plant-based dairy analogue products, which are not milk, milk products or composite milk products, no label or publicity material can be used which claims, implies or suggests a milk product.

An advertisement by Amul makes a plea to the Indian authorities, “These existing regulations need to be enforced strictly and the draft regulation of FSSAI 2020 for dairy analogues needs to be finalised and implemented at an early date. This is an appeal of the dairy industry to FSSAI.” No representation has been made to FSSAI about it, but the players are expecting the authorities will look into it.

Usually, soya and almond drinks claim to be natural. Countering this, Sodhi said, “Most of these plant-based beverages have several ingredients used to prepare it. And if you see some of the ingredients, one is smart enough to understand how healthy and natural it is compared to milk.” He further added, “Instead of making unscientific claims to defame a product that has existed for centuries, use facts to sell your product.”

Someone familiar with the matter said there is a particular brand that has entered into a plant-based business. Could it, therefore, be that brand’s desire to tap into the milk industry by spreading misleading concepts about dairy products?