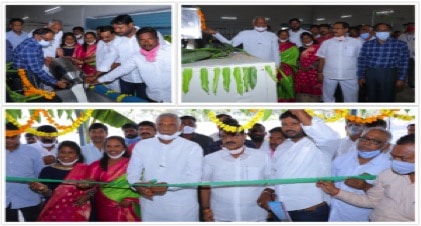 The Karimnagar Milk Producer Company Limited (KMPCL) on Wednesday opened its bulk milk cooling unit, of capacity up to 5000 litres, at Padthanapalli village of Hazipur in Mancherial.

The bulk unit helps better returns for quality milk supplied by farmers, by eliminating souring of milk due to cooling at collection and saving transportation costs.

Mancherial legislator N. Diwakar Rao, along with KMPCL chairman Ch. Rajeshwara Rao and managing director P. Shankar Reddy, inaugurated the unit and said the idea was to increase the milk procurement, while also improved the earning capacities of dairy farmers.

As of now, milk is bought from about 680 farmers from in and around Padthanapalli. The new bulk unit would collect milk from 33 villages.

However, KMPCL, which is in expansion mode, wants to enroll more numbers, and the strategy is to educate farmers about the 22 various dairy schemes for animals, and nine other schemes for its owners.

Mr. Rajeshwara Rao said KMPCL grew from 12, 000 litres per day to 1.35 lakh litres now, and the aim was to achieve the 5-lakh mark. Its next mega dairy would come up at Nallagonda village of Thimmapur in Karimnagar.

MLA Diwakar Rao congratulated the company on choosing Mancherial, one of the toppers in the State with respect to procurement, sales and implementation of maximum dairy welfare schemes.

Understanding the potential in dairy business, he urged farmers to consider Animal Husbandry initiatives, alongside agriculture, for an additional and ensured source of income.