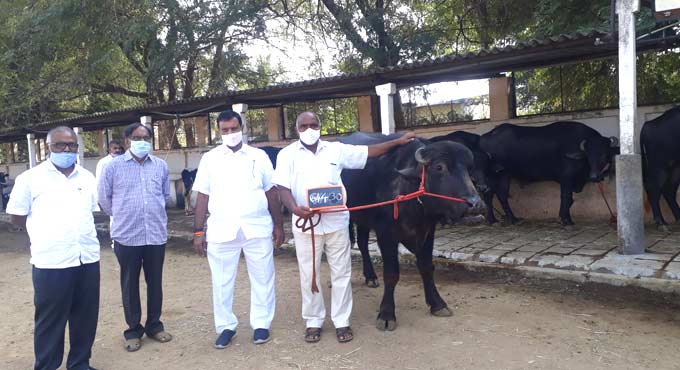 Along with the artificial insemination of milch animals, dairy authorities have started distributing the breeding bulls in the interior villages where the dairy’s veterinary assistants are unable to conduct insemination of the milching animals. The breeding bulls procured from Haryana and Punjab states are being distributed to the milk societies. The milk societies would select the farmer for rearing the bull and provide maintenance support of the animal and it would be used for crossing with the buffaloes to increase the milk production.

The allotment of breeding bulls was done only through a draw of lots in a transparent manner. The dairy was providing breeding bulls on 50 per cent subsidy. They were also helping in the insurance of the animal for three years period.

Speaking on the occasion, he said that this was the fourth slot of distribution of breeding bulls to the societies at the rate of 14 bulls in each slot and distributed 56 murrah bulls this year. They had provided insurance to the animals in such a way to replace the new bull if the animal dies of any reason.

Stating that the Karimnagar dairy had introduced a total of 32 welfare schemes for the milk producing farmers, he informed that the dairy was providing all the schemes in a transparent manner free of cost without giving scope for any corruption at any level.  He said that they had set a target of increasing the milk procurement to 5 lakh litres per day.