Indo-US FTA : What’s in it for Indian dairy farmers ? 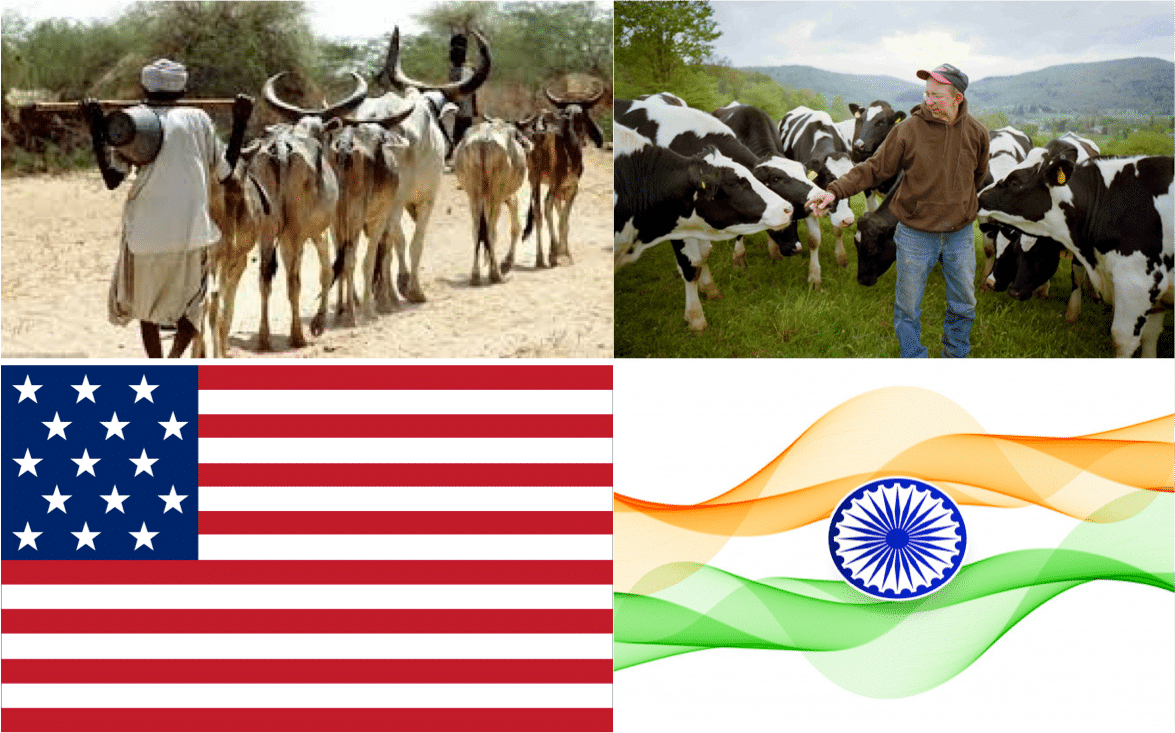 India and USA are keen to sign an FTA deal soon. US is interested in having this deal signed before US presidential elections in November. Initial deal could conclude restoration of gsp status to Indian products in US. In turn USA has sought access to its farm and manufacturing products. The news may not be very good for Indian dairy farmers. In this report published by Grain , let us understand on whats in it for Indian dairy farmers.

India imposed sanitary and phytosanitary standards on dairy imports in 2003. These and similar market access have blocked the entry of US goods. In December 2018 ,India allowed dairy imports to enter from the US with strict mandatory certification. The certification required that the it should not be from cows fed with feed containing “blood meal, internal organs, or ruminant tissues” .

Use of blood meal and growth hormone in US

Such products would be unacceptable for the majority of Indians due to their cultural and religious sensitivities. The US has so far been reluctant to comply and describes these requirements as “scientifically unwarranted”. As per few reports , Indian government is considering offering restricted access to US dairy . This access may be granted with a 5% tariff and limited quotas under the FTA. This would be a big change from the current tariff of 30% to 60%.

Another big concern about US dairy products is the use of the genetically modified growth hormone. This hormone is known as the recombinant bovine somatotropin (rBST) . I t is used to increase cows’ milk production by 10-15%. Milk from rBST-treated cows is used to make ice cream, butter, cheese and yogurt. The US Food and Drug Administration has approved the use of this hormone back in 1993 . The use of hormones is banned in the EU, Canada, and many other countries but still it is used in the US. Despite that ,Canada is now forced to import rBST milk products from the US under the USMCA.

There are 150 million dairy farmers in India, producing more milk than any other country. The vast majority of these farmers are small landholders, with two or three cows or buffaloes. Dairy is the backbone of rural India. More than 70% of what consumers pay for milk goes to the producers.

In 2015, the US government doled out $22.2 billion in direct and indirect subsidies to its dairy sector. US dairy farmers operate at a loss, and have a higher cost of production that is higher than what they earn from the marketplace. The processors and manufacturers, especially Kraft Foods, Dean Foods and Land O’Lakes normally rely on the purchase of milk at prices below the costs of production. It offers them a significant competitive advantage.

The US dairy industry is expecting to boost revenues by $23 billion in the next decade due to the removal of tariff and non-tariff barriers under the US-China FTA.Similarly, the USMCA has created new market opportunities in Canada’s highly protected dairy sector.These include provisions on geographical indications that will help prevent future losses of US market access for cheeses with common names such as “blue” or “Swiss”.

US dairy exports are increasing by more than $314 million a year. It would grow under USMCA according to the International Trade Commission. The story with the US-Japan FTA is not very different. Japan agreed to eliminate its 40% cheese tariffs within 15 years and its whey duties in 5 to 20 years, depending on the type.In fact, Japanese tariffs on hard cheeses dropped from 29.8% to 26% on 1 January 2020 and to 24.2% on 1 April 2020.The priority given to dairy under these recent deals indicates that US corporations will want a substantial share of India’s market, too.