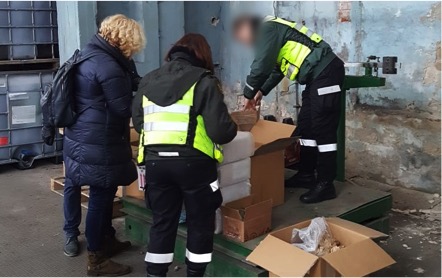 The latest operation OPSON has siezed more than €100 million worth of potentially dangerous food and drinks .  Intellectual Property Crime Coordinated Coalition and INTERPOL jointly coordinated this operation. So far a total of 672 individuals were arrested in this operation. Still with investigations ongoing in many countries.

Police, customs, national food regulatory authorities and private sector partners across 78 countries* took part in the five-month OPSON VIII operation which ran from December 2018 through April 2019. India is also amongst the countries which participated in it.

In total, some 16000 tonnes and 33 million litres of potentially dangerous fake food and drink seized in this operation. More than 67000 checks were carried out at shops, markets, airports, seaports and industrial estates.

Tampered expiry dates on cheese and chicken, controlled medicines added to beverages were amongst the offenses discovered during the operation. Meat was also found to be stored in unsanitary conditions.

As in previous operations, illicit alcohol was the most seized item, totaling over 33 000 metric tonnes, followed by cereals and grains (+/- 3 628 metric tonnes) and condiments (+/- 1 136 metric tonnes).

“This operation shows yet again that criminals will take advantage of any and every opportunity open to them to make a profit. The volume of the seizures confirms that food fraud affects all types of products, and all regions of the world”, said Jari Liukku, Head of Europol’s European Serious and Organised Crime Centre. “It is hurting the consumers’ wallets: in the best of cases, food fraud is the deception of consumers, whereby they pay for something they do not get, but in the worst cases, food fraud can result in serious harm to the public’s health. It is the duty of Europol and law enforcement more generally to make sure that what consumers get in their plates is genuine and safe.”

“Counterfeit and substandard food and beverages can be found on the shelves in shops around the world, and their increasing sale online is exacerbating the threat that food crime poses to the public,” said INTERPOL’s Director of Organized and Emerging Crime, Paul Stanfield. “Operation Opson VIII saw a substantial amount of counterfeit food and drink taken out of circulation, but there is much more that can be done. INTERPOL calls for further efforts and better coordination at the national, regional and international levels in order to stem this tide which endangers the health of consumers worldwide”.

Even children are not spared

The investigations run at the national level brought to light the fact that criminals will fake any type of food and drink with no thought to the human cost as long as they make a profit. In Lithuania, the customs seized some 335 000 counterfeit sweets packaged in a way to attract the attention of one of the most vulnerable consumer groups – children. In Italy, the NAS Carabinieri seized over 150 000 litres of tampered poor quality sunflower oil made to look like extra virgin oil by adding chlorophyll and beta-carotene to the finished product.

Europol’s Intellectual Property Crime Coordination Centre, co-funded by the EUIPO, has been running this operation together with INTERPOL since 2011. A Europol mobile office was deployed in March 2019 for this operation in Hungary to support the local National Tax and Customs (NTCA) and National Food Chain Safety (NFCSO).