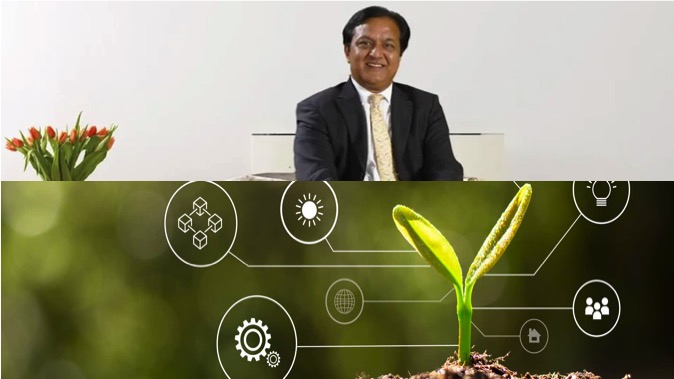 Former MD & CEO of Yes Bank Rana Kapoor addressed issues in the agricultural sector by creating and enabling a digital environment that empowers farmers towards high and inclusive growth.

The greatest of leaders see a strong business and a better world not as two conflicting goals, but as the essential ingredients for long-term success. Yes Bank’s Founder and former Managing Director, Rana Kapoor, has been an exemplary leader who has sculpted a classic model of how institutions can extend goodwill through their ventures and assume a lead in social responsibilities towards the betterment of the community.

In the new world order with the pandemic, where every sector of the economy has become heavily dependent on information technology and digitization to ensure operations don’t pause, certain lessons and wisdom from Rana Kapoor have started to resonate strongly. He opened up the digital space for the farming communities in India and empowered them with latest technology and modernized tools in the sector.

Digital technology, as expressed by Rana Kapoor, holds tremendous potential to transform the Indian agricultural landscape. Yes Bank was among the first institutions in India to adopt blockchain technology and work towards incorporating it within the agriculture sector. With blockchain, data sharing networks can be enhanced to deal with the issue of food wastage that reaches up to 1 trillion US Dollars as well as food fraud which amounts to almost 40 billion dollars across the world annually. Blockchain’s potential drives competitiveness within FMCG space, providing a higher return on investment to the producers and farmers.

In 2015, Rana Kapoor underscored the position of Indian dairy industry on an international platform, “The Indian dairy industry has grown consistently ever since the White revolution of the 1970s, making India, the world’s largest producer of milk with 17% global share. With an annual production of 146 million tonnes of milk India generates approximately USD 70 Billion of revenue. The Indian dairy market is expected to double within the next decade, primarily driven by over 15-20% growth in value added dairy segment.”

Following his lead, Yes Bank collaborated with IFCN Dairy Research Network in Germany and Food and Agribusiness Strategic Advisory and Research Group (FASAR) to publish a report on “Dairy Farming in India: A Global Comparison”. He called for advancements in the dairy industry through IoT, big data, cloud and other mobility technology. The bank’s schemes which promoted technological innovation in products, food-safety, supply and storage were recognized at the Food Processing Start-up Awards in the first-ever World Food India 2017 Summit.

Trailblazing a way to a technology led economy, Rana Kapoor extended his support to the National Agricultural Market (e-NAM), reinforcing the potential as one capable of radical transformation in key areas like the price discovery & transaction efficiency of Indian farm markets. With the digital payments space which is fast evolving with close efforts led by YES Bank, the way food processing companies engage with farmers have also adapted to this shift, offering a transparent and robust payment mechanism to the agricultural industry today.

With Rana Kapoor’s ambitious prospects, YES Bank along with its think-tank YES Global Institute has been pioneering workers in this domain, developing ecosystems within the nation that channelize strategies in the sector of food and agriculture. Being an entrepreneur and innovator, he has always commended and supported the efforts of other emerging entrepreneurs in the agricultural sector who paved the way for hi-tech farming systems with digital applications of sensor and communication technology. For his expertise and exemplary contribution to the Agribusiness sector in India, Rana Kapoor was also conferred the highly prestigious “Doctorate in Science (Honoris Causa)” by G.B. Pant University of Agriculture & Technology.

For the future ahead in the sector of agriculture tied to the digital, Rana Kapoor has elucidated for years how major challenges will sprout in this process of integration. He highlighted various issues which the agribusiness sector of our country had to contend with: decline in farm productivity, unsustainable usage of resources, rapid exhaustion of natural resources, rising demands for high-quality and safe food, stagnating income of farmers and fragmented land holdings.

He has been instrumental in promoting agri-eco tourism (including forestry tourism in Uttarakhand) in collaboration with European countries with technical assistance from scientists of the GB Pant University of Agriculture and Technology, Pantnagar. Other noteworthy personalities who have been conferred with this Doctorate include Dr. Manmohan Singh, Honorable Prime Minister of India, Ratan Tata, Chairman, Tata Group, Sunil Bharti Mittal, Founder, Chairman and Group CEO of Bharti Enterprises, KP Singh, Chairman & CEO, DLF Ltd, Late Norman Borlaug, Nobel Laureate and ‘Father of Green Revolution’, Islam A Siddiqui,

The Bank has been instrumental in planning and implementing Agro Food Parks, which is a unique transition of Indian Agriculture and Food Processing Industry to an organized, high-tech and safe, demand-led, and high-value orientation with considerable employment generation. Yes Bank has also been a pioneer in conceptualizing Modern Terminal Markets (MTM) in association with the Ministry of Agriculture (MoA), Government of India, which is a path breaking initiative envisaged a shortening the supply chain of perishables, and enhancing their efficiency resulting in increased income to the farmers.