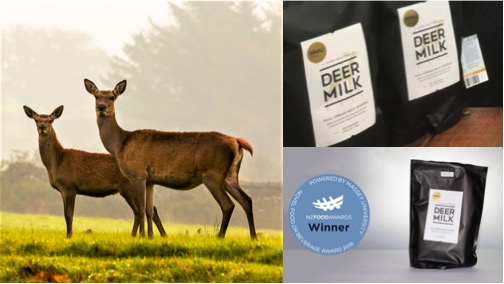 A new clinical trial aims to provide scientific evidence of the role of Pāmu deer milk; in supporting a healthy lifestyle and improving the general nutrition in a community-dwelling older population over the age of 65.

Funded by the High-Value Nutrition (HVN) Ko Nga Kai Whai Painga National Science Challenge Professor Marlena Kruger at Massey University; has been awarded $244,000 for a project to be conducted in conjunction with industry partner, Pāmu.

Pāmu deer milk is a natural source of concentrated nutrition. The composition and sensory aspects of deer milk have been thoroughly researched and could offer; improved nutritional status and vitality due to its unique composition; it has significantly higher protein content compared to cow’s milk with a different protein/fat ratio. Deer milk naturally contains vitamins and minerals that support skeletal and immune health, with additional minor components possessing anti-inflammatory effects.

Muscle Mass declines after the age of 50

The project involves a randomised comparison trial recruiting 120 women over the age of 65 with a low to normal BMI. There will be a focus on Asian ethnicity where recruitment allows for it. Participants will consume either 200ml deer milk or a commercial oral nutrition supplement daily for 10 weeks.

“This project will provide scientific-evidence for the role of deer-milk in supporting a healthy-lifestyle-and-improving general-nutrition in a community-dwelling older population; over the age of 65,” says lead researcher Professor Marlena Kruger.

“The research findings from this project will add to the existing dossier of scientific evidence for Pāmu deer milk and will be fundamental to commercialisation of a finished product that could underpin a new industry in New Zealand”.

Pāmu are focusing on China and South East Asian markets for product commercialisation, hence the desire to target an Asian population in the trial. Pāmu deer milk is sourced through the partnership with Peter & Sharon McIntyre and a Pāmu pilot scale farm in the Central Plateau.

The Māori word ‘Pāmu’ literally means ‘to farm’ but also reflects the Māori concept of guardianship of the environment. Pāmu shares with Māori a desire to see the land thrive while running productive and profitable farms. Some Pāmu farms will eventually return to iwi ownership as part of Treaty of Waitangi settlements and Pāmu are committed to working together with Māori to ensure land is farmed in a sustainable way that incorporates Te Ao Māori principles.

The HVN Challenge is a mission-led programme of innovative research into the health attributes of New Zealand-produced foods for our major export markets.

High-Value Nutrition Ko Ngā Kai Whai Painga is one of the eleven National Science Challenges. The Challenge has $45 million of funding over a five year period.