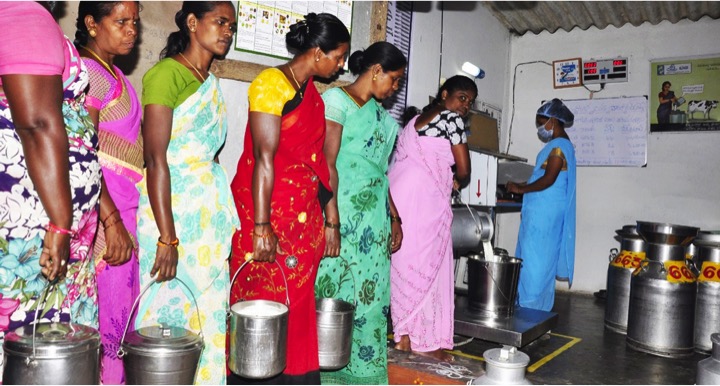 The State government is aiming at empowering women by making them a vital part of the ‘white revolution’ in the State by setting up dairy cooperative societies exclusively for them, Minister for Fisheries and Animal Husbandry Sidiri Appala Raju has said.

“The government has set up 9,899 women cooperative societies at the village level and launched several financial schemes such as YSR Cheyutha and Aasara to provide interest-free loans from the Andhra Pradesh State Cooperative Bank (APCOB) through the District Central Cooperative Banks. It is an unprecedented scheme in the State,” Mr. Appala Raju told The Hindu on Tuesday, after reviewing the status of the Jagananna Pala Velluva (AP-Amul Project) in Guntur district.

The milk is procured from the Amul Dairy, with which the government has signed an MoU. As part of the pact, the Amul Dairy will procure, process and market the milk produce, and steadily, the pace of milk procurement is picking up, the Minister said.

Stating that the project is a brain child of Chief Minister Y.S Jagan Mohan Reddy, Mr. Appala Raju said that the ham-handed approach of the previous governments had resulted in gradual weakening of the dairy cooperative societies, district unions and State federations and the rapid growth of private diaries.

Be it Visakha Dairy in Visakhapatnam, Vijaya Dairy in Krishna, Sangam Dairy in Guntur, Heritage in Chittoor, the district unions have been weakened so much so that private milk dairies flourished.

In the case of Heritage Dairy, the existing union has been liquidated, he said.

“The role of unorganised sector in the dairy industry was so much that only 25 % of 400 lakh litres of milk was being procured by the cooperatives in the organised sector, while the rest were being processed by the unorganised sector. We want to revamp the whole system and so brought in revolutionary changes. Milk Collection Centres and Bulk Milk Cooling Units are being set up and the pricing will be remunerative to farmers,” he added.