Can Women from Dairy Industry Power BJP to Gujarat Throne? 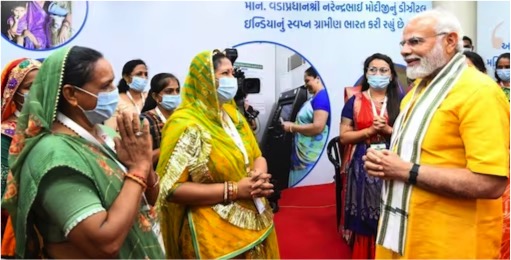 The small Ajarpura cooperative office close to the Amul headquarters in Gujarat’s Anand bears testimony to change and women empowerment.

For the first time in 75 years, a woman heads the dairy cooperative society. Gayatri Patel is one of those increasing tribe of women who have entered the dairy business and can be seen extracting milk from the many cows she nurtures.

In fact at a recent seminar on dairy, PM Modi said that about 70% of workforce in dairy business in India are women and one-third of the cooperatives are being headed by women. Ajarpura in Anand is one of them.

Gayatri tells News18, “Covid helped me. I thought of new ways to invest such as making handicrafts from cow dung. I have made sales worth over Rs 1 lakh in the past six months. I also think the Bharatiya Janata Party (BJP) has ensured that women lead. I want to take advantage of this as much as I want to help the dairy business.”

It’s a catch-22 situation though. While there is outrage over any nominal rise in milk price, women from the dairy business suffer if the prices are not raised. Says an Amul employee, “We give payment to these women based on the nutrient and fat content. If prices rise, it helps them earn more.”

As you enter Ajarpura, there are pictures of the father of White Revolution, Verghese Kurien. But it’s the movie, Manthan, which dominates their life. The 1976 Shyam Benegal movie tells the story of a vet who arrives at a village in Gujarat to set up a cooperative.

Asha Patel, who works at the same dairy farm now owned by Gayatri Patel, says, “It began as a movement headed by men, but now I think more and more women are coming and taking control. We can do it and we should.”

There are twin political reasons why the Modi government and the PM are giving a push to women in dairy. One, with a turnover of Rs 8.5 lakh crore, dairy is now a bigger economic propeller than wheat and rice. It’s also now becoming a major source of rural economy and hopefully help India emerge as one of the biggest dairy centres in the world. Lately rural-centric, the BJP hopes that pushing for dairy business would help them make major inroads in rural Gujarat where the Congress has been strong and now the Aam Aadmi Party (AAP) is focusing on making a breach.

But more importantly, in comparison to 2017, the number of women voters has increased by over 4% and a push for Nari Shakti is part of the BJP’s big agenda not just in the state, but also nationally for the 2024 Lok Sabha polls.

For those like Gayatri and Asha, the push has helped them reach positions of power and acceptance. “No one stares at us anymore if we milk the cows and carry the milk cans on our head. It’s a crown we wear,” says Gayatri with a grin before she rushes off to tend to a new calf.

In July, the PM inaugurated over Rs 1,000 crore of milk and dairy projects in Sabarkantha. The Sukanya Samriddhi scheme to benefit the girl child was also a part of this.

With focus on tribal and rural areas, dairy business and women empowerment, the BJP calculated that ‘happy women’ like Gayatri Patel can be the swing factor.