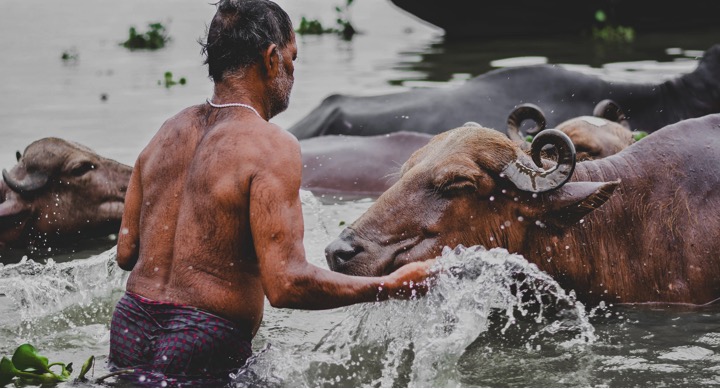 India is the world’s second-largest producer of farm products and blessed with 140 million hectares of sown farmland, nearly 1,200 mm of average annual rainfall and as many as 15 agro-climatic zones.

However, despite this treasure of resources, India’s agricultural exports are hardly $ 40 billion a year. With the world expected to add another 2 billion to the current population of 6.8 billion by 2050, we can easily boost annual farm shipments to over $ 100 billion in the near future, which will also help in more than doubling our farmers’ incomes.

But this requires a coordinated strategy and leveraging our inherent competitive advantage. Consider milk, where we are not just the world’s leading producer, but also home to the largest population of buffaloes. This offers a unique opportunity for our farmers to rear these animals for both milk and meat.

Dairy cooperatives ensure that farmers receive roughly three-fourths of what consumers pay for milk. The domestic buffalo meat industry does the same: The Rs 25,000-26,000 that the farmer gets for a 300-kg spent animal now is 75-80 per cent of the free-on-board export realisation from buffalo meat. Why should the Indian dairy farmer be deprived of the “twin benefits” (from milk and meat) that will also lead to a “doubling” of his income?

The estimated global export market for bovine meat is around $50 billion. In 2014, India became the world’s biggest exporter and it was entirely buffalo meat. But, between 2014-15 and 2019-20, the value of our buffalo meat exports fell from $4.78 billion to $3.20 billion. This was unfortunate, considering India’s vast animal population (109.85 million buffaloes as per the 2019 Livestock Census) and the world-class plants built by the industry.

Despite significant policy support from the government, we are still finding it difficult to penetrate markets beyond Southeast Asia, West Asia and North Africa. Non-tariff barriers by the European Union, US and China pose a challenge to realising the true potential of Indian buffalo meat. The frozen, de-boned and de-glanded meat that we export fully conform to the standards and guidelines laid down by the OIE (World Organisation for Animal Health). Yet, there are many large meat-importing countries that are OIE members that do not follow its charter. This needs to be negotiated on a bilateral basis, more so with the government already taking the lead in correcting the one-sided imbalances that have arisen from free trade agreements signed with some of these countries.

On the domestic front, too, the current government deserves appreciation for sanctioning Rs 13,343 crore for 100 per cent vaccination of livestock against Foot and Mouth Disease and brucellosis, apart from allocation of Rs 15,000 crore under the Animal Husbandry Infrastructure Fund. What is necessary now is to implement these programmes on a war footing.

It is important to note that almost two-thirds of India’s buffalo meat is contributed by Uttar Pradesh, which is also the country’s largest milk producer. Moreover, this state is a major tanning-cum-leather goods manufacturing hub. Our plants produce not only meat, but also quality raw hide for the leather industry, besides gelatin (from animal bones) for pharma units and tallow (from fat) for biodiesel makers. Not for nothing is the buffalo a source of wealth for UP’s and India’s farmers.

Tapping this wealth calls for a structured approach that is truly farmer-centric. Buffalo meat from India should be promoted as a natural product. Our animals are not fed bone or blood meal and neither are any growth promoters and hormones administered. As an industry, we are committed to upgrading our sanitary protocols and take responsibility for the quality of produce that reinforces Brand India’s credibility. Once the FMD vaccination drive takes off — hopefully with Covid-19 behind us — along with tagging of animals, it can set the stage for traceability of products that can act as a force multiplier for our exports.

Another government scheme that has huge promise is the Salvaging and Rearing of Male Buffalo Calves. Farmers can be encouraged to rear them to full-grown adults exclusively for supplying to meat plants. This already-existing scheme of the Ministry of Animal Husbandry needs to be rolled out at the district level, with hand-holding by district veterinary officers and in cooperation with the industry. As an agro-industry with close linkages with the farming community, there is no reason to impose a 40 per cent duty on exports of raw salted buffalo hides and not extending benefits under RoDTEP (Remission of Duties and Taxes on Export Products) to meat exports.

Finally, it is necessary to point out that the negative narrative that animal activists are weaving about the sector is ultimately going to harm the interests of our farmers. Animal husbandry is central to realising the Prime Minister’s noble goal of doubling farmers’ income. And let it come as much from their milk as meat and skin.