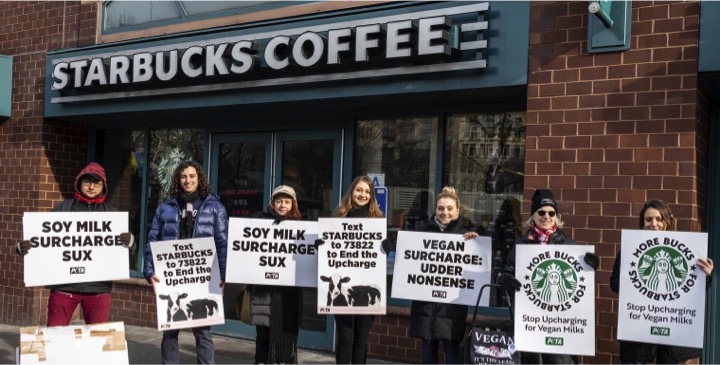 Coffee lovers in the U.S. are increasingly opting for nondairy milk in their drinks, but at several major chains, like Starbucks, Dunkin’ and Peet’s, dairy-free isn’t free. Instead, milks like soy, oat, almond and coconut can cost up to $1 extra.

The surcharge has prompted protests from the animal rights group People for the Ethical Treatment of Animals and from celebrities, who call it a fee that penalizes people who avoid animal products or are lactose intolerant.

More than a dozen PETA protesters lined up outside a New York City Starbucks on July 12, its opening day, holding signs calling on the coffeehouse giant to eliminate the surcharge as they stood behind a cow prop covered in fake blood.

“Save the planet, save the cows!” they chanted. “End the vegan upcharge now!”

“People should not be punished for making a choice that’s better for their own health as well as better for the environment and kinder to animals,” said Ashley Byrne, PETA’s director of outreach and communications.

PETA’s campaign to end the surcharge is backed by more than 100,000 supporters. In March, longtime vegetarian Paul McCartney sent a letter to Starbucks’ then-CEO Kevin Johnson, asking the company to drop the surcharge, PETA said on its website.

“I sincerely hope that for the future of the planet and animal welfare you are able to implement this policy,” he wrote.

In May, “Succession” actor James Cromwell superglued his hand to a Starbucks counter in protest.

“Starbucks continues to put profit above people and the planet,” Cromwell told NBC News. “It just shows their greed and their insensitivity both to people who are lactose intolerant but also to an environment that they claim to care about.”

He said he became vegan when making the 1995 film “Babe.”

“I said, ‘I can’t do this anymore.’ Because every animal that I worked with on the set, their relative was on a table for lunch,” Cromwell said.

Many nondairy milks cost more than dairy milks, in part because the U.S. government subsidizes the dairy industry.

Dunkin’ did not respond to multiple requests for comment.

Starbucks eliminated the surcharge in its U.K. stores earlier this year but continues to charge extra in the U.S. A Starbucks spokesperson said in a statement that it categorizes nondairy milks as “customizations such as an additional espresso shot or syrup.” The company would not say how much it spends on nondairy milks.

Get the Morning Rundown

Get a head start on the morning’s top stories.

“In today’s world, and with pricing the way it is with shortages, I understand it,” he said.

“I think it’s really inclusive to have plant-based milk offered,” said Brandon Spigner. “I feel like charging extra for it kind of takes advantage of the people who actually need it because not everybody can digest cow milk like that. I know there’s a lot of people who are lactose intolerant like myself.”

About two-thirds of people around the world have lactose malabsorption, or trouble digesting lactose after infancy, according to the National Institutes of Health. In the U.S., lactose malabsorption is more common among Black and Indigenous people, Asian Americans and Latinos than non-Latino white people.

Unsurprisingly, nondairy milks are growing in popularity. In 2019, 1 in 10 Peet’s Coffee drinks had nondairy milk in it, the company said. This year, it’s 1 in 5.

The dairy alternatives market is projected to reach $66 billion by 2030, according to market research company Grand View Research.

Still, some chains do not charge for nondairy milk, including London-based coffee chain Pret a Manger, which dropped its 60-cent surcharge in 2020.

“One of our core values is doing the right thing,” said Jorrie Bruffett, president of Pret North America. “We thought, you know what, really it’s not the right thing to do to keep having this vegan tax, if you will, or an extra charge.”

Some have criticized Pret for raising its drink prices overall after eliminating the nondairy milk fee. London-based newspaper The Times reported in 2020 that Pret increased its coffee prices between £0.05 and £0.20 “partly to cover the extra cost of vegan milks.”

A Pret a Manger spokesperson said in an email, “We do periodically reevaluate all of our prices for both coffee and food due to increasing ingredient costs, which does result in pricing increases from time to time.”

Bruffett said Pret spends 50% more on nondairy milk, but keeping it surcharge-free is worth the extra cost.

“It’s a way for us to attract more customers,” she said. “And I think they’re going to be more loyal at that point. Because why would you go someplace else to get the same cup of coffee and be charged more for it?”

PETA said it plans to keep pushing for other coffee companies to drop their surcharges.

“We want Starbucks to know that as long as they are punishing their customers by upcharging for vegan milks, protests will follow them across the country,” Byrne said.

Kayla Steinberg is a production assistant for NBC News NOW.