At Amul, we don’t check if our advertising is working or not: RS Sodhi 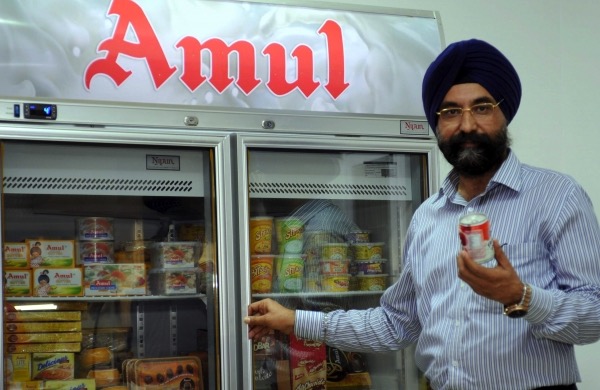 Speaking at AFAA’s ‘Inspiration’ series, (Asian Federation of Advertising Association), RS Sodhi, managing director, Gujarat Cooperative Milk Marketing Federation (GCMMF), stated how Amul doubled its faith in advertising during the first lockdown in India.   Sodhi began his talk with what he called ‘the conclusion’, elaborating on why the company did so. “We did this simply because advertising is the way of building the brand.

For any company, the brand is the biggest asset. People, factories will change over time but the brand is the ageless asset for any organisation,” he said.   He then explained how Amul used the lockdown to build this ‘precious asset’.   “You want to build an asset when you get it at the lowest price possible. When the market falls, you buy stocks. We realised that the lockdown was the best time to build this precious asset.

Dr Kurien (Verghese Kurien) said that if you want to show faith, work above the faith, which is what we know as blind faith. Advertising is the blind faith that Amul has; we don’t question it and don’t check if it’s working or not,” said Sodhi.

The biggest challenge the company faced when Prime Minister Narendra Modi announced the lockdown starting 24 March 2020, was how to communicate to stakeholders that milk is an essential commodity and will continue to work.

“When one talks about the supply chain, it’s generally about getting the goods from the manufacturing plant to the consumer. At Amul, however, we also have 3.6 million farmers involved where supplying milk is a source of livelihood. During the lockdown, we had to provide food to consumers and a livelihood to these farmers. We also had 10,000 drivers. So, we first went about with the communication to our stakeholders,” said Sodhi.

Along with banners imparting educational messages about sanitation and safety measures that staff needed to follow, Sodhi said he had one-on-one chats with stakeholders on how one could operate. With curfew passes not issued yet, each staff member had been trained in ways to speak with local authorities to transport products.   When it came to consumers, Sodhi stated Amul wanted to be there at their time of stress.   He explained, “We have been in the market for 74 years, growing at the rate of 15-16% per annum.

Consumers are part of family

For us, consumers are a part of the Amul family. So, we realised, when a family member is in distress, we need to communicate more. We had to assure them that we’re there for them. I remember everyone was panicking and that included my wife. Everyone wanted to stock up. I went to the nearest milk parlour and saw loads of people already standing in lines to stock up. I got four packs of butter. When I was coming back I realised that it’s a panic buy. I visualised this. and asked my wife to take a 10-12 second video of me. In which I told consumers not to panic as we’d make sure they’ll get their milk, butter, curd, and other essentials.

I sent this to the farmers too. We recorded it in English and Hindi and within half an hour it was published.”   With regards to the commercial advertising, Sodhi explained how this was tackled during a meeting with all its agency partners on 12 March 2020.   “In India, Covid arrived a little later. We were seeing what happened in China, SEA, and Europe during a meeting in Anand. That’s when we thought it was the best time to put our message on news channels. We increased our media spends and told Shashi Sinha (CEO, IPG Mediabrands India) to get us a good deal. By the evening we had a media plan ready and we went ahead with it,” said Sodhi.   And then came what Sodhi called the jackpot for Amul.

“In around mid-April, Doordarshan came up with re-runs of Mahabharat and Ramayan. All the families were watching television together. We thought it’s the best time to pick some family entertainment series. Ramayan and Mahabharat were the most-viewed. We told Sinha that we want to be a part of it and then became a sponsor. We were the only advertiser in the beginning. Everyone else had stopped because they were unsure about sales. Brand building, however, is not a sales exercise but a marketing exercise. We got 9.5-10 TRPs for it, which was way more than the 3.5 garnered by 2019’s IPL final. We got around five to six times more viewership at 1/10th rates, giving us 50-70 times more benefit,” said Sodhi.

Sodhi then stated how users on social media demanded them to run classic advertisements, and that’s when they started running campaigns from yesteryear.   Then, in the next two months, Amul came up with six more campaigns. According to Sodhi, this was because of decision-makers being more available while working from home and not travelling or caught up at meetings.

“FCB and DaCunha were working from home and nothing stopped. We realised decision-making and finalisation of campaigns happened faster, too, because decision-makers weren’t travelling. Our spends during the first three months of lockdown were high; we were the highest ad spenders at the time. In the entire year, we were among the top 10 advertisers,” he said.   Sodhi stated that one topic that everyone discussed in India during the lockdown was food. This insight led to its Facebook show with live recipes.

He explained, “Everyone is cooking at home. So, we came up with a show where chefs told viewers to come up with interesting recipes. We have had this going on for a year. It’s the longest-running, most-watched live recipe show with more than 2,300 episodes. The viewership of the recipes is 1.6 billion. We haven’t spent anything on this! All the chefs joined us for free because we had the reach they were after. If you use the right type of communication tool at the right time, it won’t cost you anything.”

According to Sodhi, one more reason for Amul’s success was being available and affordable during the 2020 lockdown.   “Amul was not only visible through advertising, but the brand was also available and affordable. Demand for branded products increased in rural areas, and affordability is an important issue for these markets. We could absorb the shocks of other segments because we got increased growth in the consumer product space,” he said.

Sodhi then stated the challenges he believes the company faces, the top of which is reaching out to millennials.     “We are also seeing the importance of regional media increasing. And people who were watching mainstream media on television, have moved on to OTTs. And then there is social media. While it’s huge, how can one measure the efficacy? We have TV and print measurement metrics in place, but how can one measure digital?” he asked.   In conclusion, he said, “My advice to any marketer is that please look at brand building. Advertising and communication are important. Advertising is like breathing – don’t stop breathing when you’re in difficulty. Breathe more then. With these lessons, if we do enter the next lockdown, I don’t think any brand will reduce advertising now!”