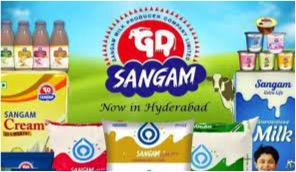 The Anti Corruption Bureau ( ACB) has found irregularities in bonus payment to milk producers and diversion of funds to unauthorized accounts in Sangam Dairy.

Sources said ACB has seized documents to establish how senior TDP leader Dhulipalla Narendra Kumar became chairman of the dairy board  without the eligibility to become the board director.

As per the rules, any milk producer could become member of the primary milk producers’ cooperative society only if he sells milk to the dairy continuously for a period of 180 days in a year.

A member is eligible to contest the election and become board director two years after becoming the member of primary society. Sources said Narendra who become member of Chintalapudi society in 2009, had become director and chairman in 2010 within a year of becoming primary member.

“It is a violation of Cooperative Societies Act, 1964,” said Ponnur legislator Kilari Rosaiah.
Rosaiah said Narendra was managing director of Dhulipalla Milk Lines, another private dairy. Although Narendra quit as MD of his own dairy, he had handed over the charge to his wife which is an instance of conflict of interest and makes Narendra ineligible to continue as Sangam dairy chairman.

ACB has found evidence about disbursement of the dairy profits to the unauthorized people. The dairy announced the highest bonus of Rs.12 per litre during 2019-20 in which only Rs.6 was given to producers. Rs.3.5 per litre was diverted to DVC Trust owned by the family and Rs.2.5 per litre was converted into share capital of the company.

“Nearly Rs.50 crore was diverted to DVC Trust which should have been given to farmers,” said a senior official of the cooperative department, who is closely associated with the investigation. Sangam Dairy procured huge quantities of cow milk from three dairies at Rs.30 per litre and mixed the same with the buffalo milk to sell at Rs.41 per litre in the market.

An official confirmed that the dairy paid Rs.200 crore to each of the three private dairies for procurement of cow milk. ”Since investigation is still under progress, we can’t comment at this stage,” said an ACB official.

Source : Timesofindia.indiatimes May 6 2021 by Samdani MN