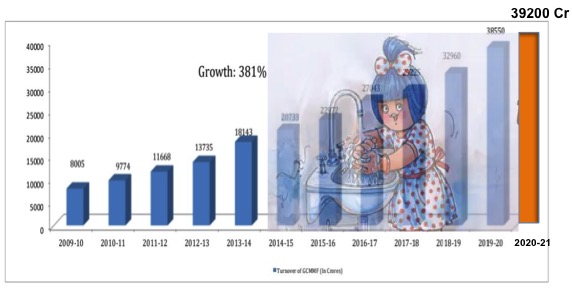 Amul brand did a cumulative turnover of Rs 53000 Crores as within Gujarat some business is billed directly by a few Unions.

The total turnover of GCMMF, which markets dairy products under Amul brand, grew 2 percent to Rs 39,200 crore; despite the COVID-19 pandemic; its Managing Director R S Sodhi said on Sunday. Gujarat Co-operative Milk Marketing Federation Ltd (GCMMF) had posted a 17 per cent jump in revenue during the financial year 2019-20 to Rs 38,550 crore. In an interview with PTI, Sodhi said the growth slowed down during the last fiscal but he expects sales to bounce back in the current financial year 2021-22. “We achieved two per cent growth in turnover during the last fiscal year to Rs 39,200 crore,” Sodhi told PTI.

However, he highlighted that the turnover of its branded-consumer-products like fresh milk, cheese, curd, butter milk and paneer increased 8.5-9 percent.

Sodhi said sales of ice cream were down 35 per cent last fiscal mainly because of the nationwide lockdown during summer. He added that the commodity business of products like skimmed milk powder (SMP) was also impacted.The household consumption of milk and other dairy products remained strong but the demand from hotels, restaurants and cafeterias (HoReCA segment) was severly affected, he said.

Also Read : IFFCO and Amul are top two largest cooperatives in the world

“We expect to return to higher double-digit growth during the current financial year,” Sodhi said.The cooperative sells 150 lakh litres of milk per day; of which, Gujarat contributes around 60 lakh litres, Delhi-NCR 35 lakh litres and Maharashtra 20 lakh litres, he added. It also sells milk in Punjab, Uttar Pradesh and Kolkata.GCMMF has an installed processing capacity of 360 lakh litre per day.

Recently, GCMMF hiked milk prices of Amul by Rs 2 per litre across India from July 1 due to an increase in input costs. Rates have been increased after one and a half years. As a policy, GCMMF passes on almost 80 paise of every rupee paid by consumers for milk and milk products to the milk producers.The price revision would help in sustaining remunerative milk prices to its milk producers and to encourage them for higher milk production, it added.