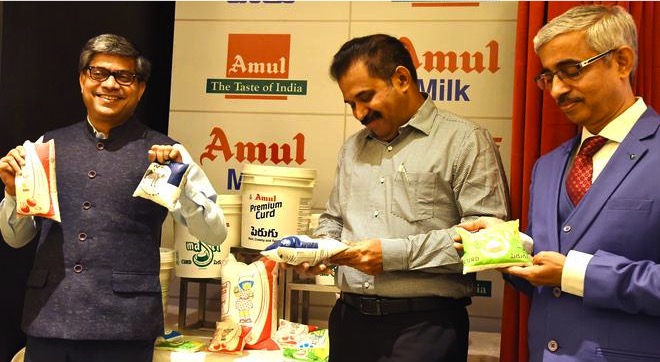 The Andhra Pradesh Dairy Development Cooperative Federation Managing Director Babu. A launched the Amul fresh milk and curd products in the city on Thursday along with the officials of the Gujarat Cooperative Milk Marketing Federation (GCMMF Ltd), which sells milk and a range of milk products under the brand name Amul.

Speaking on the occasion, Mr. Babu said milk is being sourced transparently from female dairy farmers in 1,400 villages in the State currently and the number of villages will increase by another 3,000 in the coming two to three months. He said until now the milk sourced in A.P. has been supplied to the plants in other States but from now on it will be sent to the Amul plant in Nuzvid.

For the first time, Amul is introducing fresh milk products in A.P. It is also for the first time Amul is selling milk in the same place where it is sourcing it. Mr. Babu said that farmers could get up to ₹75 per litre in the future and it is the highest ever paid in a procurement market.

GCMMF Ltd chief general manager Manoranjan Pani said Amul is the largest food organisation in India and an outstanding example of the power of the farmer’s cooperative movement. “We are confident that the people of A.P. will incorporate Amul fresh milk and other products into their daily diets.” Mr. Pani said Amul will inaugurate one plant in every city of the State every month up to a year from now so that a majority of the urban areas are covered.

Senior general manager Jambunathan Rajan said Amul milk is procured from the best breed of buffaloes and cows in A.P. and the DNA of the milk is tested every day at the Nuzvid plant where currently 50,000 litres of milk per day could be processed. Amul fresh milk is available in three varieties starting at ₹25 per 500 ml.

Why are milk prices so high, and what can be done about it?