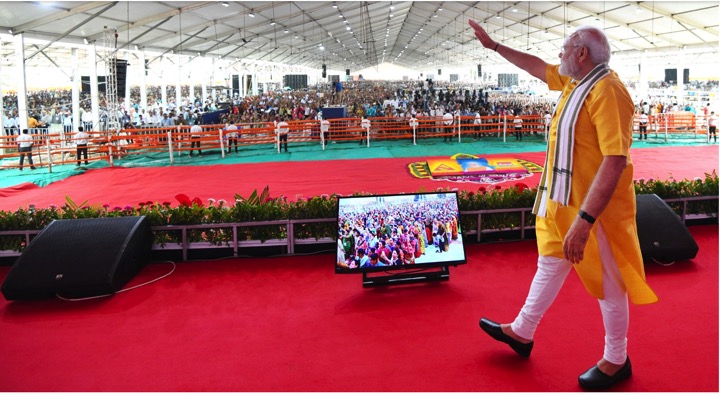 “Horticulture, animal husbandry and fisheries are contributing to the rise in the farmer’s income. The most important thing is that the landless farmers have reported the maximum increase in their incomes. This means that apart from farm produce, the strategy of working on alternative ways to increase farmers’ income is now bearing fruit,” the Prime Minister said.

He also stated that improving the khadi and village industries is another way to generate wealth in the villages. “For the first time ever, the annual turnover of khadi gramodyog (village industries) has crossed ₹ 1-lakh crore. This is why in the past eight years, this sector has generated over 1.5 crore new employment opportunities at the village level,” Modi said, addressing the milk producers of Sabarkantha and Aravalli districts.

The Prime Minister also laid the foundation stone for a milk powder plant of the Sabar Dairy at Himmatnagar. Sabar Dairy is one of the 18 dairy unions of the Gujarat Cooperative Milk Marketing Federation (GCMMF), which makes and markets Amul’s milk products.

The dairy has commissioned an expanded ultra-high treated (UHT) milk packaging plant at the cost of ₹125 crore with a capacity of 3 lakh litres per day(LLPD). It is also setting up a cheese and whey drying plant for around ₹600 crore.

The plant will have a capacity to make cheddar (20tpd), mozzarella (10 tpd) and processed cheese (16 tpd) The whey generated during the manufacturing of cheese will be dried at a whey drying plant with a capacity of 40 tpd.

Shamalbhai Patel, Chairman, Sabar Dairy said, “In past twenty years, our milk processing capacity has increased 10-fold to 30 llpd. We used to pay ₹ 165 per kg of fat to the milk producer in 2002, but today, we are paying ₹860.

The dairy has touched its highest ever turnover of ₹6,800 crore for the fiscal 2022.” What started as a union of 19 milk cooperative societies in 1964, has today become a strong union of 1,800 societies with around 1.23 lakh women members.