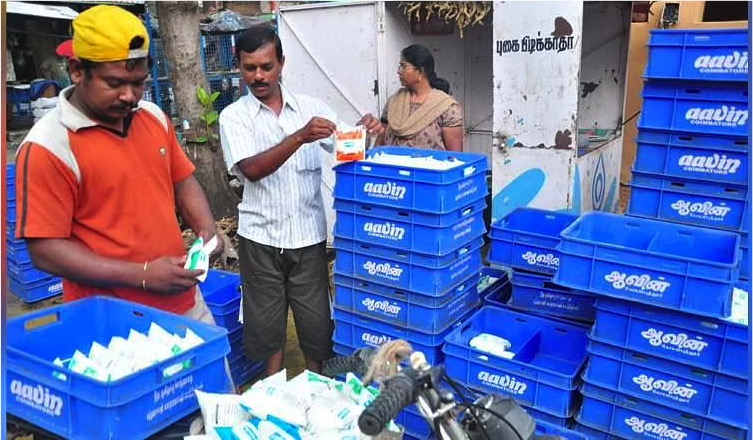 With the demand for milk increasing among cash and carry customers, the Tamil Nadu Cooperative Milk Producers’ Federation, which owns the Aavin brand, has set a target to sell 15 lakh litres of milk a day in the city and suburbs this summer. The dairy major at present sells 14 lakh litres of milk a day. The buoyancy in sales was aided by the reduction in prices announced by the present government.

“Due to special drives among residential associations, we have seen an increase of 50,000 litres of milk a day via card sales. We will hold more such drives during the coming month,” Federation Managing Director N. Subbaiyan told The Hindu.  Allaying fears of a milk shortage, he said the dairy major had enough milk to tide over this lean season. “At present, our procurement stands at 35 lakh litres a day.

Of this, 28 lakh litres a day is sold as milk. By April, the flush season will arrive and the daily procurement is expected to touch 40 lakh litres which will allow us to easily increase sales. Even now, if dealers and distributors want more milk, we are ready to supply,” he said.

On reports that restrictions had been placed on the sale of Aavin full cream milk, Mr. Subbaiyan said that the dairy major was promoting other variants and not placing any restrictions. “Our daily indent remains the same. Nothing has been decreased. We are encouraging the sale of Tea Mate since it is very similar to full cream milk. We want tea shops and restaurants to go for this variety rather than the full cream milk,” he said.

However, S. A. Ponnusamy of the Tamil Nadu Milk Dealers’ Employees Welfare Association, said that restrictions on sale of Aavin full cream milk would lead to shortage, especially because private dairies had increased the prices of milk a few days ago. The difference in price was as high as ₹18 a litre, which will drive more consumers towards Aavin, he added.