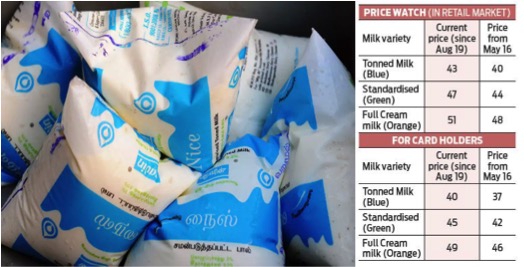 Milk producers have urged the State government to give a subsidy of ₹5 per litre of milk to Aavin, which has reduced the sale price by ₹3 per litre. The Tamil Nadu Cooperative Milk Producers Federation, whose popular brand is known as Aavin, will stand to lose ₹270 crore a year due to the price reduction.

“The various district unions attached to the federation are already running at a loss and farmers’ dues of ₹500 crore are yet to be paid. The unions are also repaying loans of about ₹250 crore taken to pay farmers’ dues,” said K. Muhammed Ali, State general secretary, Tamil Nadu Milk Producers Association.

He went on to say that unless this step was taken, Aavin would slowly sink into a debt trap and farmers would have to depend on private dairies for survival. “Milk consumers did not ask for a price reduction. It was the government’s decision and therefore it should subsidise the loss. The people are asking for a reduction in fuel prices, which the government refuses to give,” he pointed out.

In a statement here, he called for restructuring of Aavin, which procures around 32 lakh litres of milk daily. “During the last regime, the 17 district unions were further divided and increased to 25 unions. This led to an increase in number of employees and additional expenses. Cooperatives can only spend up to 2% of their turnover on administration. This is not being followed in Aavin,” he said.

“A high-level committee of experts from various bodies including Veterinary College and National Dairy Development Board should be constituted and the hike should be based on their recommendations. The last hike was in 2019. We have been seeking an annual hike since input prices keep going up,” he said.