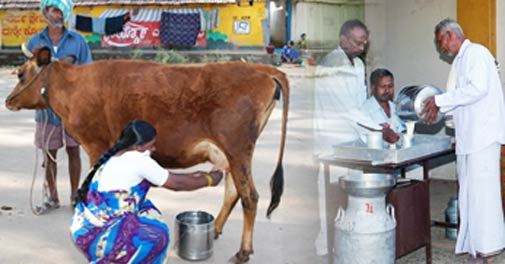 Nandini is a second largest dairy brand in the country and third most popular brand under food and beverage category. The brand has a turnover of RS 14000 Crores and it represent over 9 lakh dairy farmers in Karnataka.

KMF has 14 milk unions which collects milk from 254000 villages and caters to 10 million consumers within Karnataka. On March 24th , the prime minister of Indian announced complete lock down in the country.

It was quiet a challenging time and an unprecedented situation for the whole team of KMF . The federation faced the issues related to manpower, logistics, maintaining hygiene, packaging material etc.

The top team of KMF converted their offices into homes to boost morale of their employees as a first step. KMF’s has 15000 employees in complete operations. It also uses 4000 vehicles to collect and distribute milk. KMF also announced doubling the salary of the employees attending work during the lockdown. The management provided them food, arranged their transport and introduced hygiene practices everywhere.

The state government announced to purchase 7 lakh lpd of milk . This milk was required to be distributed in slum areas and labour colonies. KMF sold 211 lakhs litres of milk during April worth Rs 80 crore to the state government. The dairy was still facing the excess milk problem and lack of conversion capacity .

KMF sent their vehicle to Gujarat to get engineers to commission a 7 lakh lpd SMP plant during this period. KMF also took help from Union government to get the packaging material manufacturing units operate in distant states.

Such stories and efforts of dairymen always remain behind the curtains . The most important thing still remains a smile on the face of dairy farmers and dairy consumers .