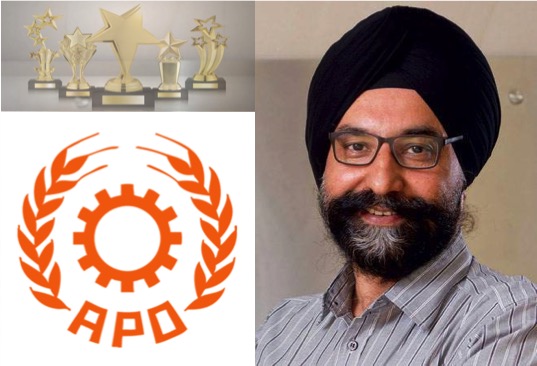 The Managing Director of Gujarat Cooperative Milk Marketing Federation (Amul), R.S. Sodhi, was conferred with the regional award as Asia Pacific Productivity Champion . It is given by Asian Productivity Organization (APO), Tokyo, Japan in recognition of enhanced productivity and efficient milk supply chain.

Sodhi is the first Indian to have received the prestigious award, in the last 20 years.

The APO invites nominations from the National Productivity Organizations (NPOs) of member countries. The Government of India’s National Productivity Council (NPC) under the Department of Promotion of Industry and Internal Trade (DPIIT); Ministry of Commerce & Industry, unanimously recommended Sodhi’s name for the award.

The award is conferred to eligible individuals who have significantly contributed to advancing the productivity movement in the Asia-Pacific region. And those in a specific member economy of the APO.

The APO regional awards are conferred every five-years and each-country can nominate only one candidate out of the all nominations. Every five years only five regional nominees receives the award.

Sodhi received the award on behalf of 3.6 million dairy farmers. “I was recommended for the first time by the ministry of commerce and industry, government of India for this award. I think that this award is a recognition of India’s most productive-and-efficient supply chain of milk in the world; where a farmer gets 70-80 percent of consumer-price as compared to world average of 35-40 per cent,” Sodhi told IANS.