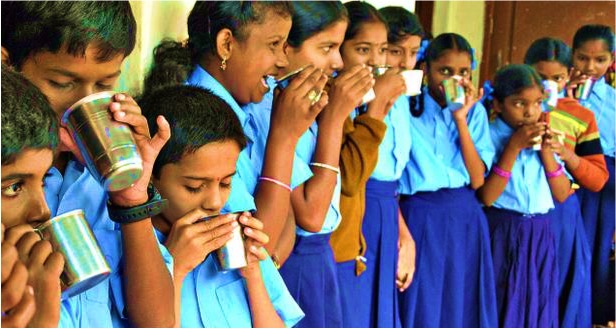 The state government of Karnataka launched the The Ksheera Bhagya Scheme on August 1st, 2013 in association with the KMF. This scheme was launched for school and Anganwadi’s children in the state. Under this scheme the government provides free milk to the school and Anganwadi’s children for five days a week. This scheme covered students from class 1st to class Xth under the scheme. The major objective of this scheme is to prevent malnutrition . It will also improve health and nutritional status of school going kids.

Covid pandemic has led to depleting nutrition levels of government school children . These concerns were majorly for the children from the economically backward sections. Recently, the Karnataka government has contacted the task force constituted to handle Covid-19 situation. The government asked the task force to supply milk powder in a 0.5-kg pack . This pack will be part of a ration kit containing 5kg rice and 1.5kg tur dal.

Coverage population under this scheme

The scheme will benefit 64 lakh students from both government and aided schools across the state. KMF is already supplying whole milk powder to 39.5 lakh Anganwadi children from six months to six years of age. Each child gets 15 gm of milk powder worth Rs 4.01 every day from the federation. By including class first to 10th students across 55,683 aided and government schools, 64 lakh more youngsters will be benefitted.

Normally, 18 gm of powder, which costs Rs 5.09, is given to each student under the scheme at their schools. But as schools have not opened since May because of the pandemic, students have been missing out on nutrition. Fat in the milk is about 3.5 percent, which is the source of nutrition for these children.

The government’s plan to deliver milk powder to homes of children has been hit by logistical challenges and a resource crunch. Ksheera Bhagya scheme has been temporarily suspended because of closure of schools. The school going kids haven’t got food and milk as part of midday meals in June and July.
The education department tied up with RDPR and decided to use the Covid task force at the gram panchayat level. While this may boost immunity of children against the pandemic and help unions manage overproduction of mil. The scheme is costing the state exchquer Rs 1,978 crore for 2020-21 . The education department is seeking Rs 320 crore for now to roll out the scheme.

“The proposal awaits finance department approval,” said SR Umashankar, principal education secretary. The finance department said the government has decided to freeze all spending, except for Covid operations. Unless the scheme comes directly under covid mitigation, getting funds might not be possible.