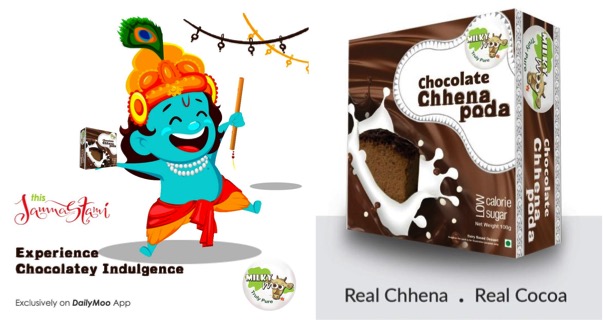 Milk Mantra is an Indian agricultural dairy products startup based in Odisha, India. Founded in August 2009 by former director at Tetley Srikumar Misra and first operational in 2012, it is India’s first venture capital-backed agricultural startup. It was set up to solve the milk scarcity problem in the state.

Srikumar shared about launch of chocolate flavored Chena poda on the auspicious day of Janmashtami.

One of his social media post read ; Reinventing a quintessential dessert – and getting it right! The purist in me decries it, the eccentric loves it – and somewhere, I feel many will love this awesome product, crafted, innovated, branded and reimagined by the Milk Mantra  team.

Team behind the development

Kudos to Moo team members especially Satabdi Suvankari Bisoi and Himanshu Srivastava who came up with the idea and took it up with their seniors, who in turn supported it, undertook numerous experiments & trials to get it right – all that in 30 days.

Happy that innovation and execution has permeated across levels and is no longer only top driven; it marks a special milestone in a company’s evolution

Chenna poda is a delicious dessert popular in Odisha. Its made with Chenna or fresh PAneer. The entire dish is baked and can also be called paneer cake.

Chenna poda literally translates to roasted cheese in english language. Its also said that chenna poda is the favorite sweet of Lord Jagannath. Chena poda is made during festivals time.