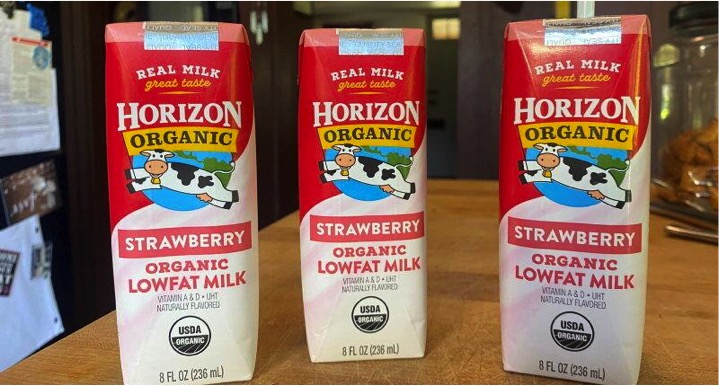 The next trend in school milk just might be inspired by Juicy Juice.

Shelf-stable milk — often packed in small cartons that look like juice boxes — is catching children’s attention, but supporters say it should also appeal to the adults who run school food service programs.

“The kids think the package is cool,” said Doug Adams, president of Florida-based Prime Consulting, which serves dairy clients. “Whether they’re using a straw or whether it’s a pull tab, the fact is it is not their grandparents’ milk container.”

Most U.S. milk is pasteurized at 160 degrees for 15 seconds. It must be refrigerated and has a shelf life of about 21 days.

Shelf-stable milk is pasteurized using ultra high temperature technology. The milk is heated to about 280 degrees for a couple seconds and then flash cooled, a process that kills all the bacteria.

The milk can then go into an extended shelf-life carton that keeps the milk fresh for about 70 days. Or a sterile, aseptically sealed container will keep bacteria out and last for up to a year, said Terry Pallister, vice president of manufacturing and development at Louisiana-based dairy processor Diversified Foods.

Some types of shelf-stable milk can be stored unopened at room temperature.

Shelf-stable milk is widely available around the world but is relatively uncommon in the United States. Pallister thinks that’s because the U.S. has an abundant supply of milk and a robust refrigerated supply chain, making unrefrigerated options less necessary.

Still, he said, the new packaging doesn’t faze kids, especially if it bears the same milk brand the school was already using.

Children are familiar with shelf-stable packaging because it’s used for protein shakes, chicken broth and — most important to kids — juice boxes.

“The kids have accepted it probably more than the parents have,” Pallister said.

School district officials attributed the change to the milk being fun and exciting, Adams said. Prime Consulting and Diversified Foods both participated in that pilot program.

While it’s the presentation of shelf-stable milk that excites children, it’s the logistical cost savings that pique adults’ curiosity.

Dallas would normally deliver milk to its schools five days a week, running refrigerated from the district warehouse.

Under the pilot program, Dallas cut deliveries to once a week and transported the milk at ambient temperatures. The cafeteria staff chilled the milk for two days before serving.

At Diversified Foods, demand for shelf-stable school milk increased when the pandemic hit and the number of deliveries to schools was cut back, Pallister said.

The long product life also adds flexibility to processors’ schedules. They can produce school milk at any time of the year, not just within a few weeks of consumption, and they have greater freedom to offer limited-time flavors.

Serving shelf-stable milk could also reduce waste of lactose-free milk, which is served to students who can’t drink regular milk.

Schools generally order lactose-free milk cartons in crates of 50, but if they only need five cartons a week, much of the crate gets thrown away, Adams said.

If schools order a case of shelf-stable milk, “it lasts nine months, and they’ll never throw one out,” he said. “So instead of giving the kids soy or water, they can now give them lactose-free milk, and that’s a big upside opportunity.”

The drawback for schools is that shelf-stable milk costs a bit more than its refrigerated counterpart, even with the five or six cents saved per serving on transportation costs.

In Alabama, where the closure of two Borden plants recently forced more than 100 school districts to find new milk suppliers, one nutrition director said she passed over a bid from a shelf-stable producer.

“When we were looking at it, I think it was like three times more than what we would pay for fresh milk,” Emily Blankenship, the nutrition director for Cullman County Schools, told The Cullman Times.

The school district eventually accepted a Tennessee processor’s bid for fresh milk that was even lower than Borden’s price, though Blankenship told the Times that other districts were still struggling to find new suppliers.

Pallister said he sees shelf-stable milk as a supplement to chilled dairy products, not a substitute.

The company has been adding co-packing capacity in the East, and will be introducing a lactose-free chocolate milk in January.

Even so, processing capacity could limit the growth of shelf-stable school milk.

Building an aseptic processing plant takes over $100 million, and the facility must be managed well to ensure a safe product, Pallister said.

GoodWest Industries of Douglassville packages shelf-stable milk in large bags for use in coffee dispensers, and HP Hood produces extended-shelf-life products that are refrigerated.