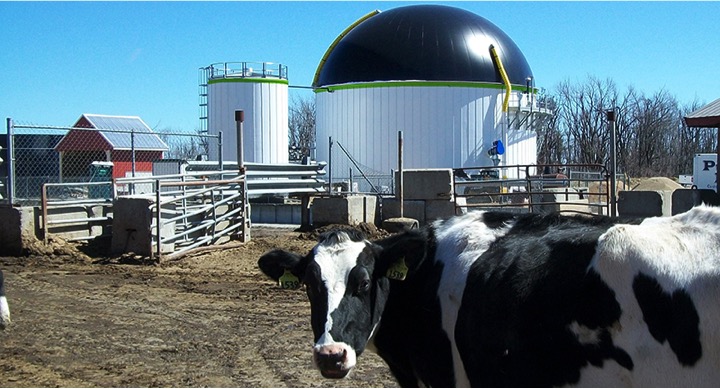 Several Westside dairies were awarded sizeable grants from the California Department of Food and Agriculture for their work in reducing greenhouse gas emissions.

The California Department of Food and Agriculture announced recently that it has awarded $37.65 million in grant funding to 41 methane reduction projects across the state. These projects, part of the Alternative Manure Management Program and the Dairy Digester Research and Development Program , will reduce greenhouse gas emissions from manure on California dairy and livestock farms. The projects will contribute $74.1 million in matching funds.

These grants enable recipients to improve their manure management practices and are anticipated to result in a total estimated annual greenhouse gas reduction of 233,393 metric tons of carbon dioxide equivalent.

“Methane is one of the most potent greenhouse gases there is, but it’s also one that we know how to reduce,” said CDFA Secretary Karen Ross. “The projects funded through AMMP and DDRDP today will have an important impact on California’s methane emissions and help us meet our SB 1383 target of a reduction of 40 percent below 2013 levels by 2030 — among the most ambitious goals in the world.”

Among the statewide recipents, were five Westside dairies.

Under AAMP, Lopes Family Dairy and Monster Dairy, both in Newman each requested and received $750,000 for their projects. Lopes Family Dairy is contributing $196,849 in matching funds for the project described as a compost bedded pack barn. The project is expected to reduce greenhouse by 11,875 metric tons of carbon dioxide equivalent.

Monster Dairy is contributing $24,393 to a project described as solid separation. It is estimated to reduce greenhouse gas emissions by 5,042 metric tons of carbon dioxide equivalent.

D&D Holsteins in Gustine also got $750,000 under AAMP for a solid separation project. They are contributing $30,347 and are expected to reduce emissions by 10,179 metric tons of carbon dioxide equivalent.

Under DDRDP, two projects submitted by California Bioenergy LLC for two Gustine dairies were awarded grants. The project of Martins View Jersey Dairy Biogas got $818,215 to add the the $5.9 million matching fund. Their expected reductions are 81,822 metric tons of carbon dioxide equivalent.

The Bar mac Dairy Biogas project was awarded $912,352 to add to the $6.8 million matching fun for an expected reduction of 91,235 metric tons of carbon dioxide equivalent.

Dairy manure produces methane when it decomposes. Methane is a powerful GHG that traps 25 times more heat in the atmosphere than carbon dioxide within a 100-year timeframe, contributing to global warming.

Dairy digesters help capture methane emissions and use them to produce electricity or natural gas. Alternative manure management practices such as scrape collection instead of flush or solid separation so more manure is handled in a dry form also help to significantly reduce methane emissions.

Implementing these practices can also provide other important co-benefits such as reducing odor and certain air pollutants like reactive organic gases or nitrogen oxides (NOx), improving the efficiency of water recycling and reuse for irrigation, and producing compost from manure solids that can be used for fertilizer and animal bedding.

This latest round of grants brings the total of AMMP and DDRDP projects to 273 since 2015. Together, these projects are anticipated to reduce an estimated 2,555,727 metric tons of GHGs per year, which is equivalent to removing more than 550,600 cars from the road.

In addition to these investments, CDFA partnered with the California Dairy Research Foundation on a proposal that was recently awarded a grant of up to $85 million by USDA through its Climate Smart Commodities Program. This award will support AMMP-related projects and activities focused on building climate-smart dairy markets and provide financial incentives for California dairy producers to reduce both methane emissions and nitrogen surplus. These projects will also leverage matching funding from non-federal sources.