Is price subsidy the only option to support dairy farmers in Maharashtra ? 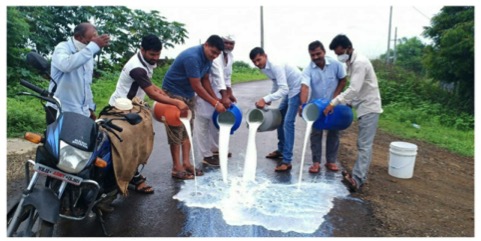 Dairy farmers in Maharashtra are again suffering from a milk price crisis . It is due to lower demand of milk and milk products and huge stocks for dairy commodities. Dairy farmers in the state are agitating by dumping milk on roads and blocking supply of milk to the cities. Similar corrections in milk prices have been happening in Tamil Nadu and Karnataka also.

In Maharashtra, the milk prices have plummeted down from Rs 30 per liter to Rs 17-22.50 per liter during the pandemic. There are many groups which are leading the farmer’s agitation in the state. They are raising multiple demands to the government for a plausible solution to this crisis.

The representatives of dairy farmers on demanded the government’s intervention amid the ongoing farmer’s stir in the state. The leader of agitating farmers Sudabahu Khot met the Animal husbandry minister Sunil Chhatrapal Kedar. The leaders submitted their request to provide subsidy to farmers and announce export subsidy on SMP.

The minister assured to take this request to cabinet level for discussions and approval. Dairy farmers of the Swabhimani Shetkari Sangathana on tuesday split milk on the roads in Sangli. They were demanding raise in milk procurement price to Rs 25 per liter.

The state government shared their initiatives during this period. They have purchased 5.80 crore litres milk in more than three months . Which has been converted into 3500 metric tonnes of SMP by spending around ₹200 crore.

Does agitating farmers know what they need ?

The farmer’s representative organisations are not in unison over their demands. The per litre subsidy request ranged between ₹5 and ₹10, while some of them demanded subsidy on SMP.

Ajit Nawale of milk producers Sangharsh Samiti said that they have demanded the subsidy of ₹10 per liter. This subsidy should be credited directly into the accounts of the farmers. It may not be given to the milk collecting bodies. He demanded an intervention scheme to ensure that the farmers get at least ₹30 a litre as procurement price.

The Opposition BJP has now launched a state-wide agitation against the drop in prices. BJP leaders have submitted demands for a Rs 10 per litre subsidy for dairy farmers. They also demanded Rs 50 per kg subsidy for milk powder.

Dairies and the state government are pushing for revival of the decentralised scheme by NDDB. It is for the creation of a buffer stock of SMP. The state government and local dairies feel this scheme will help get over the present crisis of lower farmer’s price.

This SMP is also a traded commodity with India’s average annual exports being around 1 lakh tonnes. The country currently have an SMP stocks of around 200000 MT due to global recession. Unsold SMP stock and lower demands for milk and milk products, dairies have started slashing prices paid to farmers.

NDDB maintained a decentralised stock of SMP with cooperative dairies. This stock was auctioned off as per market requirement earlier in nineties. This buffer stock helped stabilise the liquid milk market in times of excess milk production. It also helped the market when production dipped by using the buffers.

Senior state government officials have requested the central government to reintroduce the scheme. Central government as well as NDDB have been told about this. MD of a cooperative dairy added that around 40-50,000 tonnes could be demarcated as buffer stock. This will immediately bring up SMP prices and help dairies pay their farmers better.

“The subsidy never reaches the farmers. The benefit of such schemes only goes to the milk unions, federations and private brands. Mr Raghunath Patil, state chief of Shetkar Sangathana demanded to sell the excess SMP at fair price shops .

Previous Fadnavis government had announced a subsidy of ₹5 a litre for procurement of the milk. There was also a ₹50 per kg subsidy for the export of the SMP. The farmers have, however, alleged irregularities by the milk collecting unions, federations and private brands depriving farmers of the benefits.