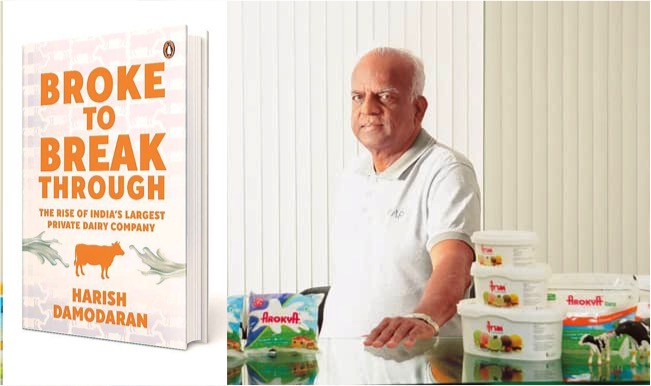 I last met RG Chandramogan, Chairman of Hatsun Agro Product Ltd, in March 2020, just before the pandemic hit and the lockdown happened. I had travelled to Thiruthangal, his home town, in water-starved Virudhunagar district, and just five kms from the firecrackers town of Sivakasi. I was visiting to see the world class badminton academy Chandramogan had put up with an ultimate goal of producing Olympic champions. He had always been a badminton aficionado; having played the sport for 35 years and having won the TN state doubles veterans (above 45 years) championship, 72-year-old Chandramogan is passionate about the game.

In the evening, against the setting sun, with floodlights on and scores of youth playing the popular local game of tennikoit (a game played with a rubber ring across a net), Chandramogan said it was a way of giving back to his home town; Hatsun invested ₹26 crore to set up the badminton facility and an additional ₹2 crore for a running track and tennikoit courts for the local youth to play.

But, the wherewithal to sponsor badminton and indulge his passion came only in his later years as an entrepreneur when Hatsun Agro had become a large company.

As journalist Harish Damodaran writes in his book, Broke to Breakthrough: The Rise of India’s Largest Private Dairy Company, Chandramogan’s career was forged in the hard grind of entrepreneurship, from the time, as the dairy man says in his introduction in the book, when he started in 1970 as an ice candy maker with a capital of Rs 13,000, three employees and 15 pushcarts. It’s been a 50-year long arduous journey and very unlike many of today’s start-ups which hit Unicorn status in a matter of few years. Today, Hatsun, maker of Arun and Ibaco ice creams and other dairy products, is a large company with a turnover of Rs 5,570 crore (FY 20-21) and a net profit of Rs 246 crore but Chandramogan’s story is that of many entrepreneurs who struggled in a Licence Raj environment and were finally able to break free and rise above the many constraints and become successful. I had first met Chandramogan in the early 1990s for a feature for the business magazine I worked for, and several times over the years, and witnessed the growth of Hatsun at close quarters.

Chandramogan, who moved to Madras (now Chennai) for his schooling, had failed Class X and felt dejected, but decided to repeat the same class in English, rather than in Tamil that he had studied in till then. His teacher of Maths and English, a PK Srinivasan, was to make a lifelong impression on him, when on the last day in school, Srinivasan told the students: “If at all we meet some years from now, please do not introduce yourself as a peon, stenographer or clerk whom I had once taught. I would consider that as an insult. Introduce yourself only if you are an engineer, doctor, lawyer, police officer, artist or a leader of your chosen profession,” were his words. Little did either know then that Chandramogan would be a leader in the dairy industry in the future. They would meet again, many years later.

Damodaran’s book is a painstaking account, abounding in figures and minutiae, of every stage of Chandramogan’s journey – from ice candy to ice cream maker and then eventually to India’s biggest private sector milk player. Chandramogan had transitioned from an ice candy maker to a milk-based ice cream maker though, as he says, in 1981 his turnover was just Rs 4.25 lakh. His break-out formula was to go to new, underserved markets outside Chennai in all the smaller towns where Arun became a powerful brand. Serendipity also had a role to play when franchisees in the smaller towns created a model of sit-and-eat parlours, which also aided the brand’s popularity. That model was eventually replicated in Chennai, where all the big brands such as Kwality and Joy competed in.

A cornerstone of Hatsun’s strategy has been an unrelenting focus on brand building. Chandramogan realised early on with his innate feel of the market that brand would be the differentiator. He even invited American brand gurus Al Ries and Laura Ries to Chennai for a session with his team on branding. His emphasis on branding was displayed when Arokya milk was launched. Instead of competing with the TN government’s milk brand, Aavin, on price, he advertised the higher fat content of 4.5 per cent in Arokya, as ‘naalaraipaal’ or 4.5 per cent fat milk, a strategy Al Ries had also endorsed. That apart, Hatsun was quick to realise the potential of packed and branded curd for working women. Curd is now Hatsun’s second highest revenue source – after milk and on par with its ice cream.

Damodaran writes about the many firsts by Hatsun along the way: sourcing milk directly from farmers by building a network and paying them on time through electronic transfers (demonetisation didn’t impact the Hatsun milk suppliers as much); helping farmers grow high-yielding fodder with higher crude protein content so that their cows yielded more milk; chilling milk at source through its active bulk cooler system; transporting packed milk and curd in refrigerated trucks as opposed to mere insulated tankers from its plants to maintain cold chain integrity and keeping its products fresher for the ultimate consumer.

HAP became a Rs 5,000 crore-plus company just before it turned 50 on April 7, 2020. As Damodaran says, it traversed every stage of an enterprise: from tiny and small to medium in the late ’80s onwards to big in the mid-2000s and finally large post 2015. As Chandramogan says in the book, “The combined turnover of my first ten years wasn’t even Rs 25 lakh, which HAP now grosses in below 25 minutes. Our cumulative sales over the first 20-30 years would, likewise, have been about Rs 12 crore and Rs 450 crore, which we, during 2019-20, did in less than a day and just over a month, respectively. The Rs 5,308.33 crore of last fiscal was equal to our sales over the first forty years.” And, all this, as Damodaran points out, was from an initial equity capital of Rs 13,000 mobilised through selling a portion of ancestral property in Chandramogan’s hometown! It wouldn’t be wrong to say he milked his way to prosperity.