Global oil price hike passed to consumers Will that happen with food too?

Brent crude prices crossed the $75-per-barrel psychological level last week and closed at $76.18 on Friday, the highest since October 29, 2018. While the increase in international oil prices – Brent was trading at just over $41/barrel a year ago – is being fully passed on to Indian consumers, it raises a related question: Will food follow fuel?

Table 1 shows global prices of major agricultural commodities, too, now ruling way above than their levels a year ago. The UN Food and Agriculture Organization’s (FAO) world food price index (FPI) touched 127.1 points in May, its highest value since September 2011.

But unlike fuel, the increase in global food prices is not getting reflected in what consumers in India are paying. Annual consumer food price index (CFPI) inflation in India, at 5% in May, was far lower than the 39.7% year-on-year rise in the FAO-FPI for the same month (see chart). While the CFPI and FAO-FPI inflation rates moved more or less in tandem till about February 2020, the period thereafter has seen a marked divergence. Global food inflation crashed after March 2020 when the novel corona virus struck. Retail food inflation in India, on the other hand, hovered around double-digits till November. It eased after that, by which time, however, the recovery in global food prices was gaining momentum.

What explains the above divergent trends? For that, one needs to first understand the drivers of both global and domestic inflation.

The spike in international food prices from September-October has been due to demand returning with economies unlocking, even as restoration of supply chains is taking time. This has been further aided by Chinese stockpiling (for building strategic reserves, as well as in anticipation of fresh corona outbreaks) and dry weather-induced production shortfalls in Brazil, Argentina, Ukraine, Thailand and even the US.

India, by contrast, has had good monsoons in 2019 and 2020, making it the only agricultural powerhouse, apart from Australia and Canada, not to have faced serious weather-related issues. Not surprisingly, food inflation started falling from December with a bumper post-monsoon kharif crop being harvested and arriving in the markets. 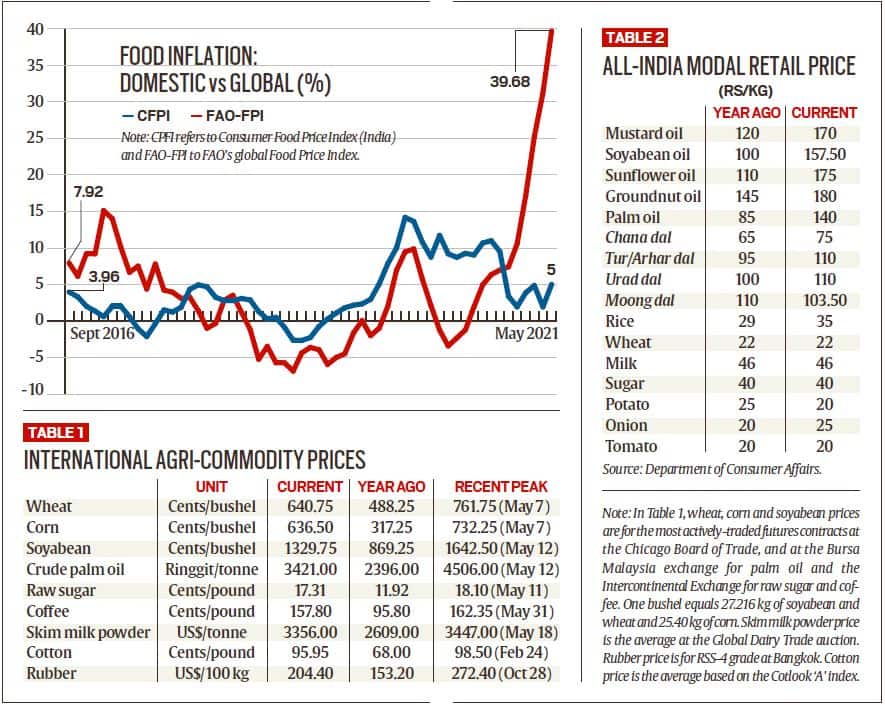 Table 2 gives a more detailed break-up of domestic retail food prices. These have gone up largely in edible oils and pulses, which are agri-commodities that India significantly imports. The country imports 13-15 million tonnes (mt) of edible oils every year and produces just 7.5-8.5 mt. In pulses, domestic output has risen from 15-16 mt to 22-23 mt in the last five years. Although imports have also halved to 2.5-3 mt, they still exert considerable influence on domestic prices. In the case of edible oils and pulses, there has been an automatic transmission of prices from the international to the domestic markets, similar to that in fuel. But the same hasn’t happened for cereals, sugar, milk and staple vegetables.

The relatively low domestic inflation in food items other than edible oils and pulses is attributable to two main factors. The first is, of course, the munificent monsoons that have ensured no supply-side shortages in most crops that are predominantly produced within the country. The second factor has to do with the collapse of demand from successive Covid-triggered lockdowns. With hotels, eateries, sweetmeat shops, hostels and canteens shut or operating at low capacity, besides no wedding receptions and other public functions, food demand has been confined mostly to households. Even that has been impacted by many households experiencing job and income losses from contraction in overall economic activity.

What next: key factors

Food inflation in India in the coming months is likely to be influenced by four determinants. The first one is international prices, which, as already noted, matters for edible oil and pulses. It’s not clear if the current surge is a result of temporary supply-side disruptions or the harbinger of a larger “commodity super-cycle” of the kind witnessed during 2007-2013. Table 1 shows that the recent peak in global prices of most agri-commodities was reached in May. The fall since then is especially noticeable in edible oils, which have been truly on fire.

The second, probably more important, determinant is the monsoon’s progress. While the country received 74% surplus rainfall in May, the southwest monsoon season (June-September) itself has recorded 18% above-average precipitation so far. That should encourage plantings by farmers and, moreover, expand acreages under oilseeds and pulses. Since production is a function of both area and yields, a great deal also rests on the rains during July-August when the kharif crops are in the vegetative growth stage. A third successive good monsoon should effectively put a lid on food inflation.

The third determinant is the extent of fuel cost increases being pass-through to consumers. The scope for it is, perhaps, limited in today’s demand-constrained environment. Take milk, where dairies incur costs for its transport, first from the village collection centres to the processing plants in mini-trucks of 2,000-3,000-litre capacity. The pasteurised and packed milk is further dispatched from the plants to the markets in bigger 10,000-15,000 litre tankers. Most dairies haven’t raised their pouch milk rates, despite diesel prices soaring Rs 15-16/litre in the last one year alone. What many have done, instead, is slash the prices paid to farmers. Procurement prices of milk containing 3.5% fat and 8.5% solids-not-fat in Maharashtra have come down from Rs 31-32 per litre in February-March (pre-second wave) to Rs 21-25 now. Thus, the fuel cost pass-through has taken place not by revised upwards the prices paid by consumers, but by lowering the prices paid to producers.

In the event of a general growth and demand revival – one does not know when that will happen —there is likelihood of processors, transporters and even farmers passing on the increase in fuel costs to consumers.

The final determinant is political. The NDA government was hawkish on food inflation in its first term. The annual rise in the CFPI averaged just 3.3% during June 2014 to May 2019. The same inflation has averaged 7.4% in its second term from June 2019 to May 2021. The protests against its farm laws have forced the government to hike minimum support prices as well as procure record quantities of wheat and paddy. With upcoming state elections in Uttar Pradesh, how much of sugar price increase would it allow, to enable mills to pay more to cane growers, remains to be seen.