Dairy Farmers in Bangladesh facing floods as lethal as a second wave after Covid: 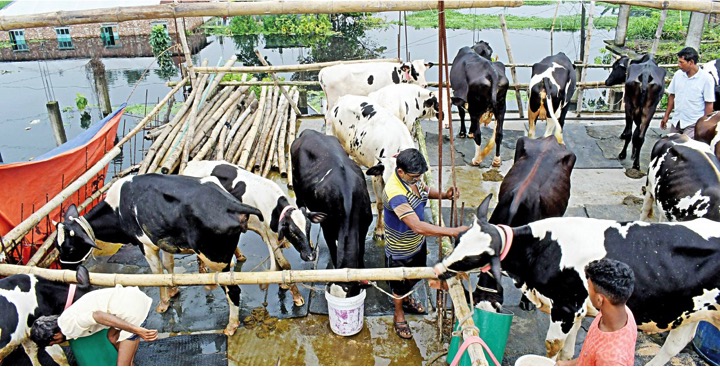 Rajib Miah, a dairy farmer from Shahjadpur upazila in Sirajganj, thought the worst was behind him when the government lifted the countrywide shutdown on 30 May and was looking forward to recouping the losses brought on the pandemic. But his hopes were dashed on one fateful night last month that saw floodwater submerge his cowshed.

He rushed to the shed and rescued his 18 cattle and took them to a street nearby. Since then, the cows have made the street their homes. Miah’s perils did not end there. As the protracted flooding inundated grazing lands, he was compelled to sell two of the cows to feed the rest of the cattle as his earnings from selling milk plummeted. Now, he can’t collect even half the amount of milk he was used to as his cows are not fed adequately.

I don’t know how I would be able to recoup the losses and when everything would return to normalcy,” he told The Daily Star. Miah is not alone as thousands of farmers like him across the country received the fresh blow of flood after the coronavirus. Milking by Md Ripon and Md Rafiqul Islam in Chatmohar of Pabna, who have seven and four cows respectively, dropped 30 to 35 per cent in the last one month due to flooding.

Around half of the daily production of milk remained unsold for the first two months since the deadly virus arrived on the shores of Bangladesh in March. Due to the closure of sweet shops, restaurants, hotels and schools and the countrywide movement control order, demand for milk nosedived between May and June. Just when the demand was picking up, on came the floods.

Milk production averages 2.2 crore litres daily in Bangladesh. But due to floods, production went down 25 per cent, according to industry insiders. Processors buy 14 lakh litres and the rest is sold to sweet shops and households. Farmers sell milk to processors for Tk 35 to Tk 47 a litre.

The floods inundated more than 30 per cent of its 108 collection centres in Pabna, Sirajganj, Natore, Bogura and Kurigram. At the beginning of the shutdown put in place to tame coronavirus, Aarong Dairy bought about 1.7 lakh litres of the liquid per day, up from an average daily collection of 1.25 lakh litres.

Processors are forced to reduce their milk procurement

But within two weeks, the milk processor, which has 28,000 registered farmers, had to stop buying the extra milk after demand collapsed. The company’s storages were also overwhelmed by 1 lakh tonnes of UHT (ultra-high temperature) milk and 150 tonnes powdered milk, according to Rahman. Milk production by Akij Dairy, which sells under the Farm Fresh brand, halved to about 28,000 litres per day.

“The floods inundated the houses and farmhouses of dairy farmers. Almost all the grass fields, one of the sources of cow feed, are now underwater,” said Md Mosleh Uddin, chief executive officer of Akij Dairy. In April and May, the sales of milk of Farm Fresh brand, which collects the liquid food through its 35 chilling centres from farmers mainly in Pabna, Sirajganj, Jashore, Khulna and Chapainawabganj, crashed 40 to 45 per cent.

“This has been a bad year for the dairy industry in Bangladesh so far. Unless all educational institutions, hotels and restaurants reopen and everything returns to normal, the downturn will continue,” Mosleh Uddin said. Before the floods, Pran Dairy used to collect 2 lakh litres of milk every day from its 12,000 registered farmers. Now, the procurement has dropped to 150,000 litres.

Floods are adding to woes of dairy farmers after covid

Most flood-hit areas for the brand are Shahjadpur and Baghabari of Sirajganj, where collection and chilling centres have almost gone out of operation.  “Despite all the difficulties created by the floods, our staff are going to remote areas on rented boats or three-wheelers to collect milk so that farmers’ sufferings ease,” said Kamruzzaman Kamal, marketing director at Pran-RFL Group.

Milk collection by state-run Bangladesh Milk Producers Co-operative Union, popularly known as Milk Vita, has also decreased to about 1.10 lakh litres per day. The company now sells about 90,000 litres daily. Before the natural disaster, it used to collect more than 1.5 lakh litres from 1.2 lakh farmers.

“Even after the shutdown, our milk collection was pretty good. But now the floods have brought down the collection significantly,” said Omor Chan Bonik, managing director of Milk Vita, which increased the price of milk by Tk 2 per litre to help farmers during the pandemic. Milk production hasn’t decreased much, said Mohammad Imran Hossain, president of the Bangladesh Dairy Farmers’ Association.

He went on to urge the milk processors to buy more milk from farmers.  Kamal of Pran-RFL urged the government to expand its support for the sector by increasing the number of veterinarians and other facilities.    “There is a high chance of attaining self-sufficiency in dairy production,” he added.

As reported by Mahmudul Hasan in The Dailystar Bangladesh