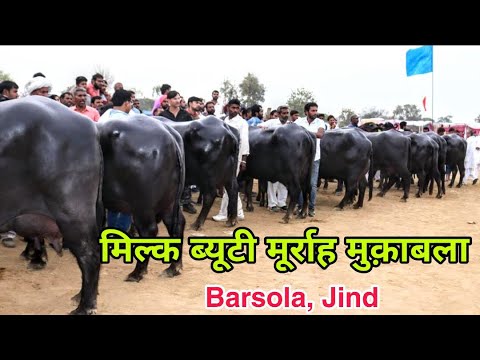 Buffalo population in Haryana has declined by about 24 per cent since 2012. Reasons like smaller landholdings, urbanisation and sales to other states cited as the major factors responsible for this.

The data shows the total number of buffaloes declined the most in the districts of Bhiwani, Jind and Hisar. These are main Murrah breeding and rearing districts in the state.However, the cow population in the state increased by 7 per cent. It rose from from 18.07 lakh in 2012, to 19.32 lakh in 2019.

Four reasons for decline in population

Director General, Animal Husbandry and Dairying, Birendra Singh cited four reasons for this steady decline in the number of buffaloes.

He said the size of landholding in Haryana has been falling for the last few years, leading to people reducing the count of livestock they keep.

The second reason is to rear good quality of animals instead of higher quantities. So, instead of keeping three normal buffaloes, farmers are now rearing a good single . Milk productivity per animal in Murrah has increased from 7.79 kg per animal in 2014-15 to to 9.11 kg in 2018-19.

There is a huge transfer of Murrah to other states from Haryana. Murrah is being demanded in other states such as Andhra Pradesh, Uttar Pradesh, Maharashtra and Karnataka. These states purchase at least 5 per cent of Haryana’s total buffaloes every year.

“The fourth reason for decline in population is urbanisation. Animal husbandry is not allowed in cities and those who are in the dairy industry also suffer losses due to increasingly expensive fodder.

“Haryana imported Gir breed of cows from Gujarat in the past. Similarly, people are now buying other state’s breeds. That could be another reasons along with stray cattles from other states in Haryana.