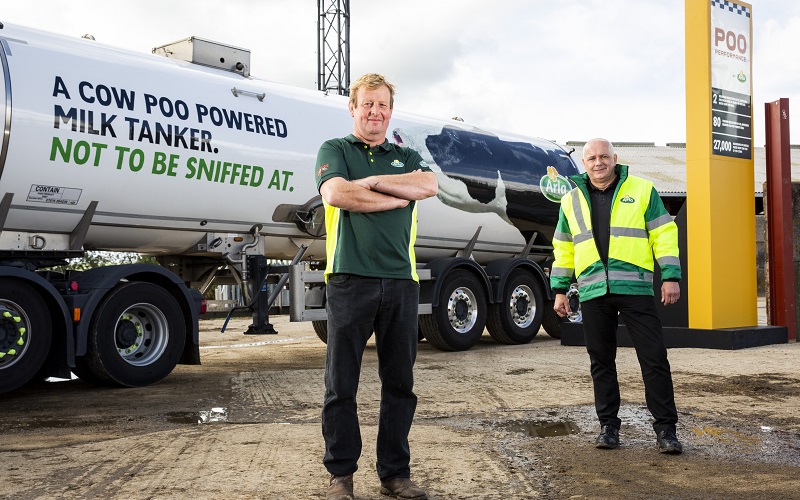 The UK’s leading dairy cooperative is getting in gear with its sustainability efforts and transforming cow manure from its farms into vehicle-friendly fuel in a major new trial.

Arla’s initiative will mean that for the first time, farmers will send their cows’ poo to a nearby anaerobic digestion plant where it will be broken down into different components, including clean bio-methane, and converted into usable fuel.

The trial makes Arla the first UK business to use waste from its own farms to generate power for its fleet. The process will also create nutrient rich, natural fertiliser which Arla farmers can put back on to farms, making it an entirely closed loop, something that hasn’t been done before.

Two special Arla tankers have been adapted to run on biofuel transporting milk between dairy processing sites under a three months test run.  Together they are expected to cover around 90,000km and help reduce Arla’s carbon impact by 80 tonnes – the equivalent to 23 car journeys around the world. Proving that muck is just as important as milk, Arla will use manure from 500 cows – that’s around 190 tonnes of slurry each week – to create a staggering 27,000kg of biofuel to power the trial vehicles.

To mark the launch of the initiative, the farmer-owned cooperative has launched the UK’s first cow-powered fuel station on one of the farms taking part in Winslow, Bucks. Ian Barker, an Arla Farmer involved in the trial said: “Many of us recognise how valuable a cow’s milk is, but many aren’t aware that manure is just as important. Processing cow manure in this manner provides us with a limitless source of energy, plus the digestate, or solid matter, left over after the process makes an even richer fertiliser for my fields, so it’s a win-win.”

Graham Wilkinson, Agriculture Director at Arla said: “Using manure from our farms is helping us reduce our waste and rely less on air-polluting fossil fuels so it’s a no brainer for us. With the help of our farmers and partners, we have a fully closed loop which at scale, could be revolutionary in helping fuel a greener future.”

Arla is using the trial to assess opportunities for scaling poo-powered transport opportunities across its value chain. If it proves a success, it will lay clear foundations for how the dairy industry can join forces with Government and other partners to enable new fuel solutions that reduce environmental impact.