Are Irish farmers the ‘most carbon-efficient food producers in the world’?

IT IS OFTEN argued by politicians and agriculture industry members that Irish beef and dairy producers are more climate-friendly compared to other countries.

The Taoiseach said this week that Ireland’s beef and dairy industry “produces in a much more carbon efficient way than other countries”.

Two independent politicians went further to claim that Irish farmers are the “most carbon-efficient food producers in the world”.

Agriculture has been under increased pressure recently as government discussions continue over emissions limits for individual sectors.

There’s two issues at hand here – the carbon efficiency of Irish beef and dairy farming and the fact that beef and dairy production generates a large amount of greenhouse gases compared to other food sources.

This is a nuanced issue, so let’s take a closer look.

The claims being made

Versions of the claims made in recent days have been made many times before.

But on Wednesday this week Independent TDs and members of the Rural Independent Group Michael Collins and Mattie McGrath released matching statements about emissions targets.

They said: “The government’s approach to Climate Action is bluntly callous and risks offshoring our food production to countries who are without emissions targets.

This approach also fails to recognise that Irish farmers are the most carbon-efficient food producers in the world, due to our grass-based model of food production.

“Thus, our sustainable production methods should not be restricted in any capacity.”

It came up again when the Taoiseach spoke to reporters in Japan on Wednesday.

“We’ve got to balance the food security issue with the climate issue,” Micheál Martin said.

“We can see how food can run short very quickly, through wars or various viruses or whatever interruption in the food production cycle can happen.

“So we have to weigh all that up. The Irish beef and dairy industry produces in a much more carbon efficient way than other countries do.

The Agriculture Minister Charlie McConalogue also said Ireland “continues to be a very efficient producer of meat and milk protein” in an answer to a Dáil question this month.

What is the basis of these claims?

One study is consistently referenced regarding the claim that Irish beef and dairy is relatively carbon efficient compared to other nations.

It’s a study from the European Commission Joint Research Centre evaluating the livestock sector’s contribution to EU emissions. It was published in late 2010 using data from 2004.

This assessed that Austria and Ireland produce the lowest cow milk emissions of all countries in the EU. Ireland was ranked with the fifth lowest emissions per kg of beef produced.

Ireland also ranked among the lowest in pork, poultry and goat emissions on a per kg basis, which is how they’re generally worked out.

A spokesperson for the European Commission confirmed to The Journal that the Joint Research Council has not conducted a similar study since.

Responding to a Dáil question put forward by former Environment Minister Richard Bruton on 14 July, Charlie McConalogue cited this research after saying that “Ireland continues to be a very efficient producer of meat and milk protein”. 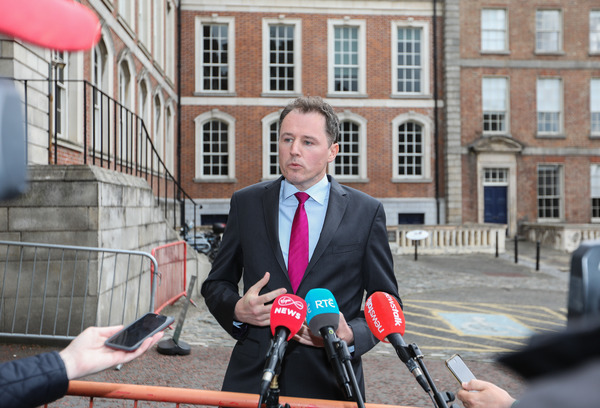 The Agriculture Minister said that although this study has not been repeated since, there are a “number of official data sources that clearly show Ireland’s positive performance in this area”.

The Teagasc National Farm Survey 2020 Sustainability Report found that beef produced an average of 10.5 kg of CO2 equivalent per kg of live weight, for example.

For dairy farms, the research found each litre of milk produced around 1 kg of CO2 equivalent.

McConalogue said the country is still making “incremental gains” around this which is “incredibly important for the marketing of Irish food exports all over the globe”.

“Given the improvements made since the initial EU Joint Research Centre report, I am very confident the carbon intensity of Irish meat and milk production compare very favourably across the EU, and indeed across the globe,” he said.

“This is mainly driven by our pasture based production system.”

A Climate Change Advisory Council 2019 working paper on agriculture and land use said that “overall research suggests that Ireland has a relatively low carbon footprint for dairy production” but that there is “clearly” room for improvement.

A 2021 report found that carbon emissions on Irish beef farms have “consistently” followed a downward trend since 2013 when records began. They have reduced overall by 6% in this time.

Dairy emissions per kg produced have also reduced by about 6% since 2013, according to figures from Origin Green.

But despite this improvement in efficiency, a report acknowledged that “absolute emissions have increased in Ireland due to recent growth in the dairy herd”.

So there is a lot of available evidence that beef and dairy production in Ireland results in fewer emissions than production in other countries.

However, a 2011 report from researchers in the Netherlands and Germany had different findings to the 2010 EU Joint Research Centre report despite using the same modelling system.

This found that Ireland had the fourth highest CO2 equivalent emissions in the EU in milk production and the ninth highest beef production emissions per kg of product.

In this study Ireland’s emissions from pork, poultry and eggs also ranked worse than the EU average.

The 2019 CCAC working paper mentioned the different findings of these reports, adding that the studies “may be out of date” as their data is from the early 2000s.

Paul Price, climate researcher and current carbon budget research fellow at Dublin City University, said the conflicting evidence from these studies is significant when the 2010 research is cited so frequently without reference to the 2011 study. 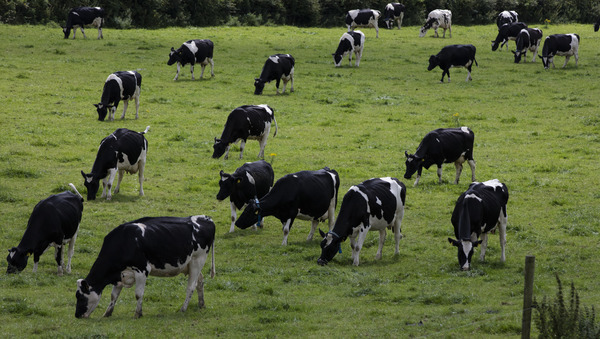 Agriculture accounts for 37.5% of Ireland’s overall greenhouse gas emissions, the largest by far of any sector.

A recent report from the Environmental Protection Agency said emissions from the sector increased by 3% last year, the second year in a row agri emissions have increased.

Ireland’s total emissions need to decrease by 51% by 2030 and reach net zero emissions by 2050 to stay in line with legally binding targets.

According to the EPA report, the most significant drivers for the rise in agricultural emissions were increased use of synthetic nitrogen fertiliser, higher dairy cow numbers and an increase in milk production.

Paul Price said it’s a “misdirection” to solely focus on the carbon efficiency of cattle if emissions are still going to rise at a time when they need to be falling significantly.

“What you’re into is a situation where if you produce more milk, that’s just going to require more feed and more chemical nitrogen input and therefore result in more emissions,” Price told The Journal.

“It doesn’t matter how efficient you are anyway, it’s kind of a misdirection if you’re producing the same amount of milk.”

The UN’s Intergovernmental Panel on Climate Change has said that more people could be fed using less land if individuals cut down on eating meat, moving towards a more plant-based diet.

A number of other reports in recent years all point towards the need to reduce meat consumption and production around the world.

This calls into question the role of beef and dairy in global food security when other food sources often require less land and resources to produce more food.

The Taoiseach this week said Ireland needs to “balance the food security issue with the climate issue”.

Professor Barry McMullin from Dublin City University said that global food security is extremely important but it doesn’t mean every type of food should be equally protected.

“We need to actually expand the production of those food types that are least damaging to the environment and do that as quickly as we can and simultaneously contract those food types whose production is very inefficient in terms of nutrition output compared to emissions,” he told RTÉ radio this week.

Unfortunately, Ireland’s structure is oriented to just almost exactly the wrong types of food in terms of contributing to that enhancement of global food security.

“We’re almost entirely reliant on livestock-based systems, so meat-based human food, but we know, we’ve known for a long time, that’s energetically inefficient and it’s inefficient in terms of emissions.”

Paul Price agreed with this assessment, saying: “Feeding the global population particularly in the poorer parts of the world requires grain.

“In that respect, looking forward for food security which countries, especially countries with decent climates, should focus more on that at least and less on importing any grain for animals to eat.” 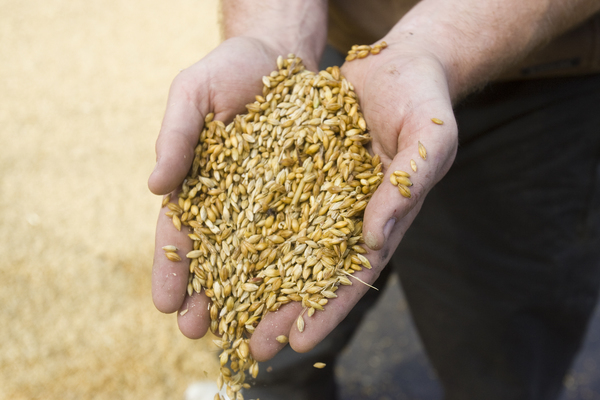 File image of wet barley being prepared for the silos at the Athgarvan Mill, in Co Kildare.Source: Eamonn Farrell/Photocall Ireland

A spokesperson for the Department of Agriculture cited the 2010 EU report when asked about a backing for the claim that Irish beef and dairy is more carbon efficient than other countries.

“Irrespective of the age of the report, Ireland continues to focus on improving performance with grass based production noted as a carbon efficient system,” the spokesperson said.

They further referred to 2021 research from Teagasc which found that the carbon intensity of beef production decreased between 2014 and 2019.

A spokesperson for Mattie McGrath, one of the Independent TDs who had claimed that Irish farmers are “the most carbon-efficient food producers in the world”, cited a number of sources including the 2010 European Commission study in response to a follow-up query from this website.

None of the sources cited went so far as to rank Ireland first in the world for carbon efficiency of food production.

Among other references, the spokesperson mentioned a 2017 booklet about the government’s previous agri-food strategy Food Wise 2025.

This leaflet said that Ireland is “recognised as a global leader in the dairy sector in terms of the quality, safety and sustainability of our dairy production”.

But ultimately, in spite of the claims made this week, there is no study showing that Irish farmers are the “most carbon-efficient food producers in the world”.