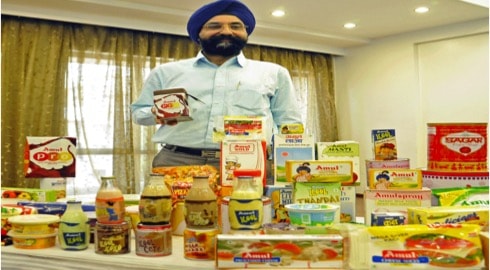 Consumer pack exports grow 55% to Rs 250 crore driven by demand in US, Middle East and Singapore

As per the data, the Gujarat Cooperative Milk Marketing Federation Ltd (GCMMF) — Amul’s marketer — reported exports of dairy products’ consumer packs at ₹250 crore during April-November 2020, which is a phenomenal rise of about 55 per cent over the same period last year.

“Our consumer packs exports have grown about 55 per cent on a sharp jump in the retail consumption driven by markets such as US, West Asia and Singapore. The overall exports have been higher by about 17 per cent so far this fiscal,” RS Sodhi, Managing Director, GCMMF told BusinessLine.

However, the dairy giant has reported a steep decline of about 60 per cent in its commodity exports — including dairy whiteners — skimmed milk powder, full cream milk powder and butter oil (ghee) in bulk at about ₹20 crore until November.

Even as the exports are not the focus area for Amul, which gets only about 3-4 per cent of its overall revenues from exports to about 50 countries. But the recent consumer trend towards packaged dairy products has come as a booster for the Federation, which now expects its overall diary products exports for the fiscal 2020-21 to hit ₹600 crore – 64 per cent higher than ₹365 crore last year.

As per the Central government’s Agricultural & Processed Food Products Export Development Authority (Apeda), India has exported total 59,651 tonnes of dairy products during April -October 2020 period, which is about 15 per cent less than 70,483 tonnes exported during the same period last year. However, in value terms, total dairy products exports stood at ₹1,214 crore , which is marginally lower than ₹1,226 crore reported in the same period last year. Apeda has quoted an average unit value of $2,721 per tonne, which is about 12 per cent higher than last year’s average unit value of $2,431 per tonne.