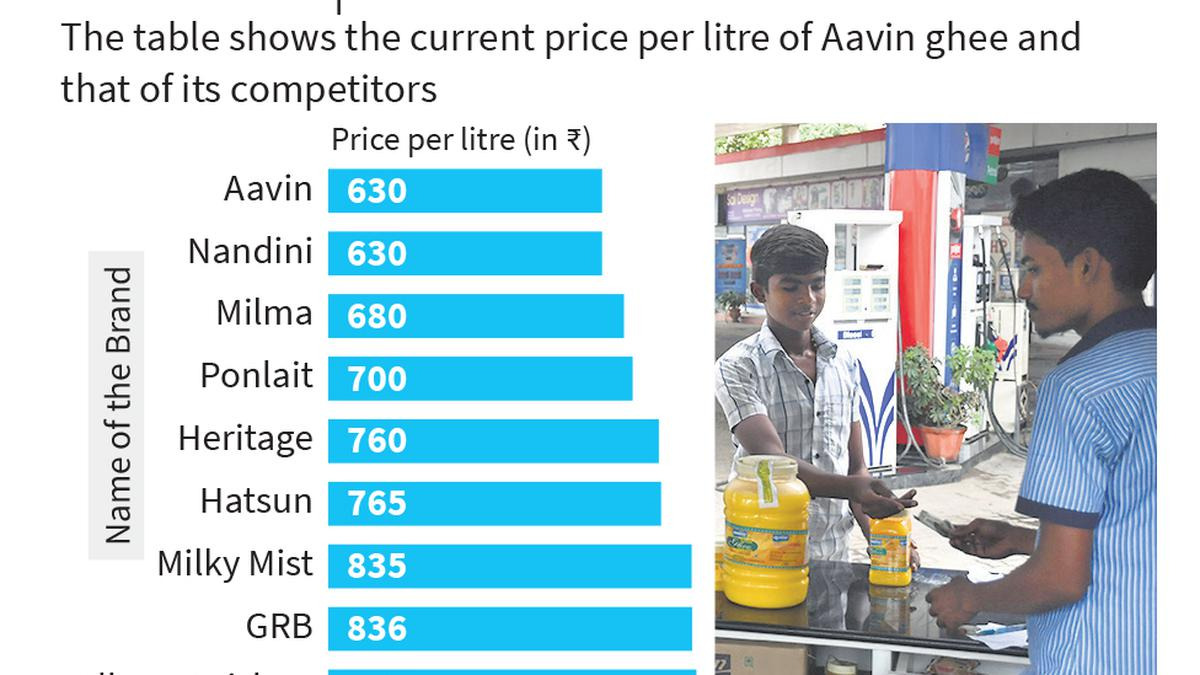 The price is either on a par with or lower than that of its competitors. The increase has been effected after the market and the prices of the competitors were studied, says an official.

The increase has been effected after the market and the prices of the competitors were studied, says a senior official of the Federation, popularly known as Aavin after its brand of products, justifying the decision.

“We have brought the price of our ghee on a par with that of Nandini [the brand name of products of Karnataka Cooperative Milk Producers’ Federation Limited],” the official points out.

The official says the price of one litre of ghee being sold by many private dairies ranges from ₹760 to ₹850.

Even the ghee from a couple of other cooperative dairies is priced higher than the Aavin product.

On the finances of the cooperative dairy sector, the official says that of 27 District Co-operative Milk Producers’ Unions (DCMPUs), five are in the red and the rest are making profits. Last year, the Federation incurred a loss of ₹40 crore and the DCMPUs lost ₹15 crore.

The total sales revenue (a sum of sales achieved by the Federation as well as the DCMPUs) was ₹7,887 crore. The Federation’s share in it was ₹2,439 crore and the DCMPUs’ share was ₹5,448 crore.

“For the current year, we anticipate at least 5% increase in these figures,” says the official. This year, there has been a revenue surplus of ₹18 crore. However, the accumulated losses stand at ₹190 crore.

‘An act of punishment’

Meanwhile, the AIADMK’s former interim general secretary, V.K. Sasikala, and AMMK general secretary T.T.V. Dhinakaran criticised the DMK government for the increase in the ghee price. This is the third revision made in the last one year, and the price has gone up by ₹115 a litre. While Mr. Dhinakaran called the increase an “act of punishment”, Ms. Sasikala demanded its rollback.

BJP Tamil Nadu president K. Annamalai condemned the price increase. He pointed out that the sale of its full cream milk (orange-coloured packets) had taken a hit after its price was increased last month. He wondered whether the DMK government was planning to shut down Aavin by helping the private players through price rises.